THE MAN BEHIND THE MAN FROM CORWOOD 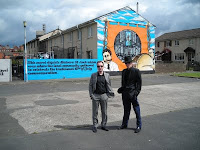 David Keenan blogs about the experience of touring Northern Ireland as Jandek's drummer.

What struck me the most is that the bulk of Jandek fans don't really seem to come out of experimental or improvised music. Most of them dig Jandek as a singer-songwriter - albeit a 'weird' one - and so listen to his music in an entirely different way to someone, say, who came out of listening to more avant garde music like Keiji Haino or Derek Bailey. Bailey's audience assumes intentionality, some kind of deliberate aesthetic or conceptual choice behind the use of new, awkward or unconventional rhythms, tones, harmonies etc. But for many Jandek fans, because they see him as someone who is 'trying' to play songs, they rarely judge the music as being intentional, it's more like he 'can't' play in time - because he's an 'outsider artist' - than he actually made the decision to play in a different time. It's not that his accompanists are 'unable' to play 'in time' with him, they're actually trying to work out new ways of relating rhythmically. Jandek is an artist, not some kind of dysfunctional musical savant. It is all about the music. That's how it's supposed to sound. He's not trying to get somewhere and falling short.