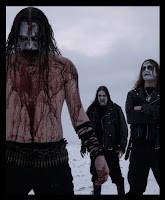 From the Village Voice's Sound Of The City blog:

Black metal fans rejoiced (or whatever the black metal equivalent of rejoicing is) on Saturday night, as the legendary Swedish band Marduk returned to New York for their first performance here since 2001, preceded by a Friday night meet-and-greet at Duff's in Brooklyn and a pre-show listening session for their new album Wormwood, on board the tour bus. This was the final night of a three-show mini-tour booked after a co-headlining slot on the Blackenedfest tour, with the equally revered Mayhem, fell through back in May.

Two New York-area bands opened the Gramercy Theater bill. Tombs' short hair and lack of theatricality made their thundering drum sound and minimalist, dissonant riffs all the more impressive. Their bare-chested drummer raised his arms above his head regularly to muster greater force, even standing up at one point and pounding the kit like he was in Swans or Einstürzende Neubaten. Black Anvil were more traditional in their look (long hair, serious ink) and approach. Their most "black metal" moments were their weakest; whenever they got heavier and thrashier, betraying their hardcore roots (the members are also in Kill Your Idols), they were at their best. Withered plays black metal mixed with thrash - their almost Mastodon-ish two-guitar interplay and their dual vocals (one high, one low, trading lines on some songs) were another pleasant surprise. They closed their set with a brand-new song, "From Shadows," which didn't really sound any different from what had come before it, but that was a good thing.

Finally, after an eight-year wait, Marduk took the stage in corpse paint - the only band of the night to do so. With a taped intro, a militaristic/ominous semi-industrial loop reminiscent of Laibach, they emerged to roars and chants from the packed house. Founding guitarist Morgan Håkansson and bassist Magnus Andersson stood facing their amplifiers, arms behind their backs, as drummer Lars Brodesson took his place. Frontman Daniel "Mortuus" Rosten emerged, arms spread wide like a professional wrestler, inciting ever louder screams. They immediately launched into a blasting set that stretched all the way from their debut, 1992's Dark Endless, through later albums like 1998's Nightwing and 1999's Panzer Division Marduk and up to the present. Mortuus has a progressive, avant-garde solo project, Funeral Mist, that's clearly influenced recent Marduk efforts like 2007's Rom 5:12 and the forthcoming Wormwood, but his delivery on old-school blasts like "Burn My Coffin" and "Baptism By Fire" had an undeniable, even intimidating power.

Black metal can be trebly and unpleasant on disc, but Marduk's sound was a room-filling roar, with Mortuus's vocals chewing through the mix like a rabid bear. He tossed his hair with impressive ferocity when not glaring out at the chanting, horn-throwing crowd and bruising circle pit. Mid-set, he raised a goblet of cow's blood to his lips, drinking some but pouring much of it down his face and chest. Håkansson and Andersson were slightly more stone-faced, headbanging furiously, but mostly aloof. Perhaps they were thinking about the set list, which apparently was different at each of the three U.S. shows. Still, Gene Simmons (the father of corpse paint?) would have been pleased by the showmanship on display. Let's just hope they come back before 2017.
Posted by Phil Freeman at 3:09 PM