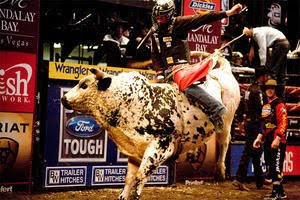 When you picture a bull-riding competition, does it have a Coldplay soundtrack? How about Rihanna? Britney Spears? Prince? Donna Summer? Lady Gaga? I didn't think so either; I was expecting George Strait, Alan Jackson, Toby Keith, Montgomery Gentry, maybe Big & Rich. But instead, pure mainstream pop blared from Madison Square Garden's soundsystem Friday night, as the Professional Bull Riders association started a three-night weekend stand—their fourth straight year at the decidedly citified venue.

If you've never been to a PBR show (a thriving sport that's grown steadily for a decade—more than 30 regional tournaments are scheduled for 2010, leading up to October's World Finals in Las Vegas), you're missing an experience that'll overwhelm even the most ardent urbanite. It's no laid-back stock show or county-fair rodeo—it's an explosive, nonstop barrage of light, sound, and pure energy. I first attended a PBR event in 2008, and was immediately struck by the rock-concert atmosphere: that constant-flow-of-awesomeness effect Gregg "Girl Talk" Gillis is always striving for? These guys have mastered it, basically by offering something no mere DJ or rock band—never mind a relatively staid country act—can match.

Namely, the chance to maybe see someone get stomped to death by a gigantic, raging animal. The bulls are the size of small cars, only louder and faster. And the men who ride them—well, they're bigger than jockeys, but not by much. Most bull riders are in the five-foot-seven/five-foot-eight range, white guys from red states (and Australia), along with a surprising number of Brazilians. Most wear hockey-style helmets with face grills, but some climb aboard with nothing but a cowboy hat to shield their skulls from the hard ground or a well-placed hoof or horn.

The night kicks off with a video of the riders strutting around Manhattan—picking up local ladies, straddling the bronze bull on Wall Street—set to Ace Frehley's "New York Groove." Then they're introduced in person, walking onto the Garden's dirt-covered floor one by one and waving to the crowd as concussive techno blares and pyro explodes, including the initials "PBR," which burn in the dirt and must be stamped out before the rides can begin.

The music played during PBR competitions falls into a few basic categories. There are the hard rock and metal songs—riffs, really—that go by too quickly to be identified, since they're only played during the actual eight-seconds-or-less bull rides. As for the full songs played in between, many are generic Jock Jams: Joan Jett's "I Love Rock 'n' Roll," AC/DC's "Back in Black" and "Thunderstruck," ZZ Top's "Got Me Under Pressure," Loverboy's "Workin' for the Weekend," etc.

These are joined by the notably less generic Songs That Could Theoretically Be Metaphors for Bull Riding: David Bowie's "Let's Dance," Twisted Sister's "I Wanna Rock," Stray Cats' "Rock This Town," The Cars' "Shake It Up," Queen's "We Will Rock You," Iron Maiden's "Run to the Hills." (There's some Generic Jock Jams overlap here, admittedly.) But then we get to Songs That Are Frankly Just Baffling: Coldplay's "Viva La Vida," Prince's "U Got The Look," King Floyd's "Groove Me," Diana Ross's "Upside Down," Pitbull's "I Know You Want Me (Calle Ocho)," Marc Anthony's "I Need to Know," Britney Spears' "3."

What's remarkable about that playlist is the total absence of country. Stars like Brad Paisley, Jamey Johnson, Toby Keith, and Kenny Chesney have borrowed arena-rock melodies and showmanship, but even bull-riding crowds—a sizable chunk of whom, both in New York and elsewhere, are doubtless fans of the genre—seem to prefer actual arena-rock when the bulls are bucking and the floor is shaking.

Mark Stephenson, the DJ who throws all these seemingly incompatible musical cues at the riders, the bulls, and the sold-out crowd, is a genial, bearded guy in a black cowboy hat and a matching, logo-covered vest who started out DJing local events in Oregon before hooking up with the national tour. He works from two laptops, each containing 30,000 to 40,000 songs, and provides a constant soundtrack to the riders' runs and the interludes in which scores are announced while the next bulls and riders are prepared. "I won't get a break for two hours," he says with a laugh when I ask if he'll have a minute to talk during the show. But he manages, during a two-song, Dixie Chicks–esque live-band intermission. No, all the riders don't have theme songs, but a few do. If they start to lose, they'll switch songs, out of superstition. No, he doesn't think the music affects the bulls: "I would think the crowd noise would be louder, and they probably get more riled up over that."

Keeping everyone riled up between bulls is Flint Rasmussen's job. There are two clowns who really act more like bull herders—they wear bright shirts but no makeup, and hang out by the chutes like goaltenders, distracting the animals when the riders leap off or are thrown. Rasmussen, though, is the main clown, and he really works the crowd. He wears makeup and a bright black-white-and-green jersey advertising Enterprise Rent-a-Car, and he dances to the music constantly, headbanging or spanking himself or doing mock-Broadway choreography in the dirt. He also does backflips and occasionally clambers into the audience to interact with fans. On Friday night, he danced "seductively" with a massive male attendee as Flo-Rida's "Low" shook the arena.

So, yeah, there's much more to a PBR event than young men confronting massive, pissed-off animals. It's family entertainment in the best sense of the term: Looking around the stands, I saw hundreds of kids, their eyes bugging out at the sight of the wildly bucking bulls, especially post-ride, when the animals would frequently charge the length of the arena, pursued by a lasso-swinging cowboy on a white horse. Rasmussen got a fair amount of comic mileage from one bull's run, which thrilled a bunch of kids at ringside but seemed to spook the burly, full-grown security guard standing right next to them. (Soundtrack: Gloria Gaynor, "I Will Survive.") Oh, and did I mention there was a mid-show event with youngsters no older than eight clinging to the backs of galloping sheep while Lady Gaga's "Poker Face" blared in the background? Yeah, that happened.

Afterward, I met Shane Proctor, the night's winning rider with a score of 91.25 (don't ask me; the bull-riding scoring system is gymnastic-grade inscrutable). He claims to have no particular riding theme—just "any pump-up music there is, like Eminem. A lot of his stuff, just 'cause the beat's uptempo." He says he doesn't think the bulls notice the music, "but I sure know it affects me, and, if I'm excited, it gets them excited."