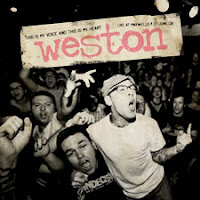 WESTON
This Is My Voice And This Is My Heart
Black Shirt
"If you're not a teenager, you are tonight," says James Snyder of the Pennsylvania pop-punk-turned-alt-rock band Weston on This Is My Voice And This Is My Heart, recorded live at Hoboken, New Jersey's landmark underground rock space Maxwell's. That sentiment sums up the live album quite well, as it's the sound of four dudes recapturing their own youth in front of an equally nostalgic audience. The vast majority of the set comes from the band's first two records, A Real-Life Story Of Teenage Rebellion and Got Beat Up, almost totally ignoring later efforts and their stylistic shift from speedy, melodic punk to Weezer-meets-Pixies soft-loud rock. It's sloppy, good-humored fun, with friendly between-song banter and plenty of audience interaction. And judging by the fervent crowd response, Weston gave the thirtysomethings present exactly what they wanted--songs about teenage romance sung by a hoarse-voiced dude who kinda sounds like the Lazy Cowgirls' Pat Todd. "I feel reborn!" shouts another band member after they've just finished blasting through the only brand-new song on the disc, "Pucker Up Baby." No one who's ever gone to All Tomorrow's Parties to hear some re-animated band stagger through a decades-old album has any room to point fingers or ridicule that sentiment.
Posted by Phil Freeman at 12:42 PM
Labels: lazy cowgirls, pixies, weezer, weston