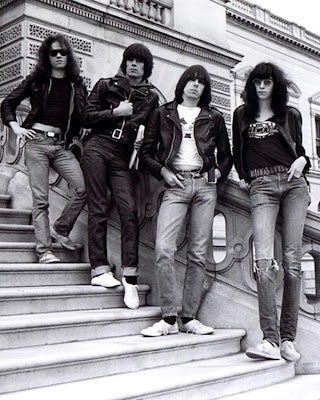 Things The Ramones wanted to do: Be your boyfriend, sniff some glue, dance, be a good boy, Carbona, be well, have something to do, have some fun, have some kicks, get some chicks, be sedated, live.

Things The Ramones did NOT want to do: Walk around with you, be learned, be tamed, go down to the basement, be a pinhead no more, be taught to be no fool, live this life anymore, be buried in a pet semetary, fight tonight (on Christmas), grow up.

Things The Ramones could not, would not, or did not do: Be, care, give you anything, make it on time, care about history, know why she wrote that letter, go surfing 'cause its twenty below, let it happen, seem to make you theirs, control themselves.

Things The Ramones did do: Make a living by pickin' a banana, serve as green berets in Vietnam, go out west where they belonged, swallow their pride, know your name, know your game, remember you, want you around, go mental, be affected, live on Chinese rock, hate the teachers and the principal, watch Get Smart on TV, want the airwaves, want everything, sit in their room (humming a sickening tune), think of you (everytime they ate vegetables), believe in miracles, love you.

Things The Ramones told you to do: Shut it up, Beat on a brat with a baseball bat, ring up the FBI to find out if their baby's alive, eat that rat, give them shock treatment.

Things The Ramones warned you about doing: Shutting it up, killing that girl, talking to commies, opening that door.

Things you didn't do for The Ramones: come close. mean anything to them.

Things The Ramones would do next time: listen to their hearts.

[Totally jacked from this guy.]
Posted by Phil Freeman at 6:55 PM
Labels: ramones