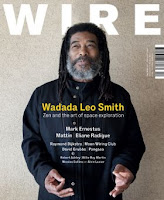 I wrote the cover story for the new issue of The Wire; it's about trumpeter Wadada Leo Smith. I'm not gonna reproduce the whole thing here, because a) the editors would get mad at me, and b) I want you to go buy the issue. Trust me, it's worth it. I'm really happy with the story, and there's a bunch of other cool stuff in the issue - an Invisible Jukebox with synth/computer music pioneer Eliane Radigue, for example. But here's a teaser:

“You learn a lot about yourself when you play solo music,” says Wadada Leo Smith. “Because focusing on a solo requires the same kind of energy as focusing on an ensemble. It’s just that the ensemble gives you a multiplicity of things to look at, while a solo gives you this intense involvement that amounts to the same thing.”

A trumpeter and composer who started out on the drums, this friendly, soft-spoken professor with shoulder-length dreads and a grey beard has spent more than four decades exploring a unique and hypnotic soundworld that has involved jazz quartets, loud electric groups, string ensembles and groups of laptop improvisors, but some of his most affecting music has been performed alone in a room with an array of horns, percussion devices and other noise makers. And even when surrounded by other players, there’s a spacious quality to his composition and instrumental approach that creates a Zen-like calm in the listener.

Smith was one of the first post-Fire Music avant garde jazz players. Born Leo Smith in Mississippi in 1941, he converted to Rastafarianism in the mid-1980s, taking the name Wadada, which means 'love' in Amharic, the Semitic language of Ethiopia. In recent years, he has converted again, this time to Islam, and added the name Ishmael, but his voicemail message still announces, "This is Wadada." Along with Anthony Braxton, Leroy Jenkins and other members of the Chicago based AACM (Association for the Advancement of Creative Musicians), he helped shift the locus of American free playing from the spiritually overpowering blare of Albert Ayler, John Coltrane, Pharoah Sanders, et al, towards something that focused on overtly intellectual explorations of music as language and system. Between 1967 and the early 1970s, he appeared on many crucial discs, including three of Braxton’s earliest albums (3 Compositions Of New Jazz, the self-titled BYG release and This Time), as well as Kalaparusha Maurice McIntyre’s Humility In The Light Of The Creator and Marion Brown’s Geechee Recollections.

“I had been referred to [Braxton] by another fellow I met in the army - I guess when they were stationed in Korea or something,” Smith recalls. “I had a phone number, and when I got to Chicago I looked Braxton up and we started immediately making connections. It was a mutual situation, where I understood things he was looking for and he checked out some of the things I was looking for.”

Smith contributed one of his own pieces, “The Bell,” to Braxton’s debut album as a leader, 3 Compositions Of New Jazz. In its first half, the piece primarily features violinist Leroy Jenkins, with occasional piano from Muhal Richard Abrams behind him; at the composition’s midpoint, though, Smith and Braxton enter, turning it into a mixture of 20th century classical and raw sound. Braxton switches frantically between instruments (clarinet, flute, saxophone), seeming to offer no more than one blurt or squawk on each before dropping it. Smith, on the other hand, seems to be attempting to play the trumpet in such a way as to emphasize the silence more than the notes. This strategy would recur again and again in the decades to follow.

It was in the process of writing and recording this piece that Smith began to develop his compositional concept of “rhythm units,” later to be formalized as a graphic notation system known as Ankhrasmation (the word is a hybrid of the ancient Egyptian word for 'life force' (ankh), the Amharic word for 'head' or 'father' (ras), and the universal term for 'mother' (ma)). “I discovered that rhythm could be organized as proportional and not metrical,” he says. “And I found that if I could group a set of figures into an idea of long and short, and then I organized a relationship between each set, between a single set and between each part of a set, that I had stepped on something that would be profoundly useful. I didn’t know at the time they were rhythm units, or that it would have such an impact on my music, I simply knew that I was struggling hard to find a way to verbally contextualize what I was trying to do in these figures. And the rhythm units gave me that idea.

“When I came to Chicago I had already composed a pretty good body of work and already begun to understand music without metrical progression or modulation,” he continues. “And I was never, ever working in a harmonic sphere, where harmonic progression was important. And you look at Braxton, he was doing just the opposite, he was looking at how you make creative music with those connections. I was not so much interested in that part of it. I always looked at how you make music without all those things everybody has inherited.”