[Note: When I interviewed bassist Mike D'Antonio for this story, neither of us knew that vocalist Howard Jones would not be taking part in the tour. (He's being subbed out by All That Remains frontman Phil Labonte.) If that subject had come up, believe you me, it would have made the piece, because it raises all kinds of questions about the stuff he and I did talk about, like the possibility of filming a live DVD or of playing sets featuring deep catalog songs.] 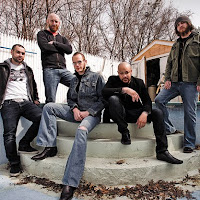 Considering that the Massachusetts metalcore kings have been around for a decade, it may seem bizarre, or even impossible, that Killswitch Engage is now on their first ever headlining tour. They preferred being the perennial support act on tours like Ozzfest and the Mayhem Festival, to going out on their own.

"It's kind of a weird thing, but also cool that we've had such opportunities to tour with bigger bands and have other people take the heat of being the headliner," says bassist Mike D'Antonio. "Sometimes that can be a little stressful, worrying about how the shows are gonna go, if people are gonna come. We've just had really good luck in that sense, of not having to do that yet."

Killswitch Engage need some positive public attention. Their self-titled 2009 album, which marked their first time working with an outside producer — Brendan O'Brien — wasn't much of a change from their previous release, 2006's As Daylight Dies. If anything, it was even more simplistic and less aggressive. The band's combination of crunching metal riffs, emotional lyrics and singalong-worthy choruses made the almost imperceptible shift from trademark to stylistic rut.

Perhaps for that reason, they've had their thunder stolen by more adventurous groups like Baroness, Mastodon and Bay State peers Converge, all of whose 2009 albums scored well in various metal publications' year-end Top 10 list, while Killswitch Engage's was ignored. And while it sold well, landing in the Billboard Top 10 the week of release, there are rumors that Killswitch Engage didn't meet label expectations. D'Antonio doesn't concern himself with that stuff.

"Apparently, there were a lot of good records that came out this year," he says. "That's someone else's call."

He's more concerned with what fans think — and even there, he sets limits.

"The only real interaction I like is face-to-face," he says. "The message boards tend to bum me out. It doesn't matter if there's 500 great comments, the one negative comment will haunt me for weeks. So I just stay away completely. I know people aren't gonna like what I'm doing, and that's fine. I just wanna stay away from that negativity."

Now that they're finally getting their moment in the spotlight, D'Antonio plans to make the most of it. "Hopefully, I'm getting a 15-minute bass solo where I'll do absolutely nothing but slap on my bass like Gene Simmons with a lot of echo in the background," he jokes.

More seriously, he says fans should expect set lists that go deep into the band's catalog. "We're definitely digging into the pile of older material and playing a lot more of the new stuff as well. We feel like the album's been out long enough [that] people should have it at this point. Up until now, we've been dabbling in [the] songs people are gonna gravitate toward — [playing] the guessing game, as far as how people will react to certain songs. We've been playing around with that, and we think we've got a gauge on it."

In two cities — Chicago and New York —Killswitch Engage will be able to dig even deeper into their catalog, since they're playing two-night stands. D'Antonio says there's a possibility of a live recording, but given the band members' busy schedules, such plans have fallen through in the past.

"We recorded a lot of shows a couple of years ago," says D'Antonio. "But no one's had the time to even listen to those, so I don't know if that'll ever see the light of day. There's talk of possibly filming stuff for a DVD. It's been a long time since we've had a DVD, and we've been discussing the options with some of these second-night places. We could easily set up and record two times in a row and pick the best songs from each night."

The band is taking another left turn in their career. Just as they've chosen package tours over headlining runs, they've also chosen to play smaller venues than they probably could, given their record sales and the fervor of their fan base. They like it that way. "It's hard to gauge the energy when the barrier is 20 feet from the first people in front of you watching," says D'Antonio. Of course, that's not the only reason. "These days, with the economy and the way things are going, people don't have the money to go to an arena show. At least I don't see it."

Still, there's an upside to this plan. "We wanted it to be a bit more intimate, have it be a setting for people to have more fun, participate, be squished together — really get into it with [us] and therefore help [us] put on a better show," says D'antonio. "So yeah, we're scaling down, but the production will be as big as Mayhem if not bigger. Some of these small places are gonna be loaded with stuff and might look pretty cool. A lot of the fans that have seen us on smaller headlining tours have never seen anything like what we're bringing these days."
Posted by Phil Freeman at 10:25 AM
Labels: baroness, converge, gene simmons, howard jones, killswitch engage, mastodon, phil labonte