YOU WANT THIS ACTION 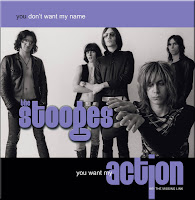 The 4CD box You Don't Want My Name You Want My Action is, in effect, the first album by The Stooges. Their music has always been overshadowed by Iggy Pop's histrionics - not only his awesome, leonine vocals, but his quite literally in-your-face stage presence, rocketing back and forth and up and down and diving into the audience (which he doesn't do anymore, though Stooges reunion shows frequently ended with the reverse, Iggy letting as many members of the audience could fit pile onto the stage). Hell, for the last two years of its existence and its third album, the band was billed as Iggy And The Stooges. What had at one point been an avant-garde performance art spectacle had become a mere rock band.

This collection of live bootlegs, documenting four performances from spring 1971, offers the only evidence of The Stooges as five-piece - Ron Asheton and James Williamson on guitar, Jimmy Recca (who?) on bass, and Scott Asheton on drums, plus Iggy up front. And/but unlike the studio albums, which were produced in traditional rock-band fashion with Iggy's vocals as loud as the whole rest of the band put together, these live tapes are a showcase for the band. Iggy's barely audible half the time, and when he is his voice is so distorted and thin he sounds like Jon Spencer or somebody. What we get instead is a wall of wailing guitar, Asheton and Williamson tearing it up with almost Les Rallizes Denudes abandon, just wave upon wave of distorted power chords backed by drumming that slams the snare through your forehead like a nail gun. The sets are short - six songs and about 40 minutes of music per night - but they're astonishingly adrenalized, pure live-wire mania. This is not headphone music; this is total screaming rock 'n' roll abandon. Highly, highly recommended.
Posted by Phil Freeman at 2:43 PM
Labels: iggy pop, james williamson, jon spencer, les rallizes denudes, ron asheton, scott asheton, the stooges