IF YOU LET GO OF THAT THING, MAYBE IT'LL STOP SCREAMING 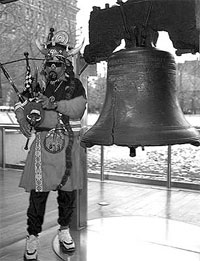 So I got this Rhino Handmade set by Rufus Harley - who apparently passed away earlier this year - in yesterday's mail. He was the only jazz bagpipe player to date, an idea which immediately appealed to me, and I might not be alone. Given the general popularity of drones within the indie music community of late, as well as the mini-vogue for 60s jazz (think of all those BYG and ESP reissues of the past few years), Harley's moment might well have arrived. The set is called Courage: The Atlantic Recordings, and it stuffs all four of his studio albums for the label, recorded between 1966 and 1970 (Bagpipe Blues, Scotch & Soul, A Tribute To Courage and King/Queens) onto two discs, along with one previously unreleased cut from the King/Queens sessions and a track from a Sonny Stitt album on which Harley blew. I listened to Bagpipe Blues and the first four tracks from Scotch & Soul on the way to work this morning, and...well, I was a little let down.

I'm not saying the music's bad. It's not. The two or three cuts on Bagpipe Blues that actually feature the bagpipes are pretty great, particularly the opening title cut, which puts the pipes atop a kind of blues-march rhythm that works very well. But it's too short, and fades out before any kind of real catharsis is achieved - a disappointment for an album from 1966. I get the feeling that producer Joel Dorn was treating Harley as a novelty act (I get that impression from a lot of the Roland Kirk albums he worked on, too) while pretending/loudly protesting that he wasn't doing anything of the kind. This impression is solidified by the fact that the bagpipes actually only appear on less than half the album; on other tracks, Harley plays flute, soprano and tenor saxes. The bag is there to get curious record-buyers out of the store with a new purchase, but the majority of the record is straight modal/bluesy jazz, fine, but hardly surprising. The same is true of Scotch & Soul, where only three of seven tracks actually feature the bagpipes. (The Sonny Stitt track, "Pipin' The Blues," which closes Disc One, is ironically a much better showcase for Harley than many tracks from his own first two albums - he takes a terrific, high-energy solo over pulsing organ and a hot, funky/swinging drummer, effectively seizing control of the song from its putative bandleader.)

I'm looking forward to checking out the other two albums, particularly King/Queens, which features bagpipes on six of its seven tracks, and despite the slight feeling of producer-induced bait-and-switch, I highly recommend picking up Courage: The Atlantic Recordings, even at the inflated Rhino Handmade price of 2 CDs for $39.95, whenever they issue it (it's not on the site yet).
Posted by Phil Freeman at 8:40 AM

Enjoy your blog and your music writing in general.

I recall you did a nice interview and piece about Ornette before Sound Grammar was released. Thought you might be interested in my site, which is currently hosting a track from OC's great Carnegie Hall gig this summer with three bassists. Plus an unreleased and storming Prime Time live track from 1978 that was broadcast on German radio. Both of them are stellar. They're at:
www.destination-out.com

Keep up the good work.

Oh, I'm very familiar with your site - heard about it from Steve Smith. Thanks for stopping by!