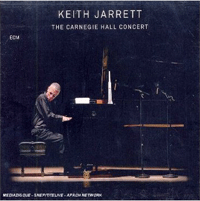 Pianist and occasional vocalist Keith Jarrett's solo concerts are among his most impressive achievements, whether they're mammoth documents like the six-CD (down from 10 LPs) Sun Bear set or this relatively intimate, 110-minute excursion from last year. This return to unaccompanied performance after a decade (in North America anyhow) marked a substantial change of style. Despite the fact that all tracks (save the encores) are untitled improvisations, they seem like structured and fully thought-out compositions. Some creep toward the 10-minute mark, but others barely last more than three. Jarrett has clearly come to realize the limits of discursive nonstop performance, a form few can pull off with consistency. Even Cecil Taylor occasionally falters in solo performance, although he can always recover with a two-fisted outburst of volume and power - an option Jarrett prefers not to exercise. Carnegie Hall is delicate and romantic even at its most energetic moments.

The set is somewhat oddly packaged: On this night, Jarrett apparently performed a 33-minute set of five pieces, followed by another five-part second "set" of equal duration, and a five-song encore that included "Paint My Heart Red" and "My Song," along with the standard "Time On My Hands." Despite sharing its title, "True Blues" is another improvisation (as is the first encore "The Good America"), not a version of the Modern Jazz Quartet track. Disc One contains the first five tracks of the primary performance, while Disc Two holds the second five and the encores. One could quibble with this structure, arguing in favor of the 10 untitled pieces appearing together, followed by the encores on their own disc. But if it's all gonna wind up in an iPod anyway, the question becomes academic. And anyhow, the point is the music, which is pure beauty, rewarding to the longtime fan and the first-time Jarrett listener alike.
Posted by Phil Freeman at 8:29 AM