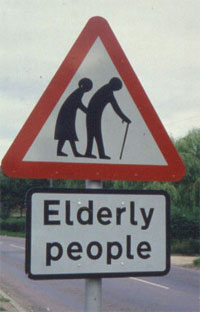 Interesting article about the AARP getting into the music-marketing business, or trying to. I think it's a good idea. I've never believed in pop as community. Even when I was twelve and listening to American Top Forty every weekend just to hear "Rock The Casbah," I didn't think it meant I had anything in common with anyone else who liked that song. Music was already a solitary pleasure, something (taste) that separated me from other people, not something that bonded me to them. If someone recommended a record and I liked it, I was grateful, but I didn't invite them to my house so we could listen together. And while concerts aren't fun alone, I've always preferred going with one friend rather than in a group. So the increased narrowcasting of media outlets is a blessing as far as I'm concerned. There's no such thing as all things to all people, at least not where music or art is concerned. Once you're old/self-aware enough to know what you like, why not seek out as much of it, in as pure a form, as possible? If your taste changes, you can seek out another outlet that will give you an uncut and uninterrupted stream of whatever it is you've just discovered you like.

Example: I decided recently to dip a toe into dubstep. Off I went to barefiles.com, and downloaded five or six hour-long mixes by various DJs. I soon discovered that the stuff wears mighty thin mighty fast, that its vision of urban (American) black culture verges on gangsta minstrelsy and black-dick fetishism, and that I didn't need any more than what I already had, and maybe not even that much. But when I wanted to hear dubstep and nothing but, I knew where to go. The same is true of death metal, and of free jazz. There's still an element of surprise, but within narrow and prescribed parameters. And that's how I like it.

(Jello Biafra called a DKs compilation Give Me Convenience Or Give Me Death. That's the problem with him; he doesn't see what a grand and glorious thing target marketing is. Or maybe he's just pretending not to; he sure seems to know exactly where to find each year's crop of dumbasses ready to lap up his pesudocontrarian spiels. Always going for that anti-marketing dollar. Very smart.)

See, the thing is, not only do I not want to share what I like with you—beyond getting paid to write reviews of it and occasionally talking about it on this here blog—I don't want to have to hear what you like. (Especially if you like mainstream hip-hop and R&B, or reggaeton, or mainstream country.) The supposedly halcyon days of the Sixties and Seventies, when "free-form" radio would play just any goddamn thing at all right next to any other goddamn thing, sounds like a nightmare to me. If I like Grand Funk Railroad, what in the fuck is gonna make you think I wanna hear Melanie? Nope. Keep your singer-songwriters over there, and let me fry my brains with amp damage over here. We'll wave at each other as we pass, like Sam and Ralph.
Posted by Phil Freeman at 1:58 PM