I don't get free copies of The Wire unless I ask for 'em, and I only do that when I've got the cover story, and it takes my local newsstand almost the whole month to actually get copies, so I just read the new one yesterday. Here's my sole contribution to it. 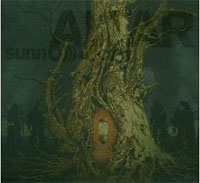 Sunn O))) & Boris
Altar
Southern Lord
The idea of Boris and Sunn O))) collaborating is both natural and brilliant at first, but doubts quickly set in. On their own, both groups have developed highly individual sonic vocabularies which seem to share common roots in the late 80s/early 90s Pacific Northwest heavy rock scene - Sunn O))) are descendants of Earth, while Boris are named for a Melvins song - but are in fact largely incompatible. Sunn O)))'s drumless roar doesn't really benefit from the addition of Boris drummer Atsuo's cymbal crashes and thundering kick/snare action. On the other hand, Boris are perfectly capable of droning on and on all by themselves (cf. 1996's Absolutego or 2001's Flood), so why do they need Greg Anderson and Stephen O'Malley?
Altar works as well as it does because all involved understand that transcending earlier successes, not rehashing them, is the key. So even more guests are invited to the party, like vocalist Rex Ritter on the keyboard-driven pastorale "The Sinking Belle (Blue Sheep)" and former Soundgarded guitarist Kim Thayil, one more feedback wave on the ocean of sound that is album closer "Blood Swamp." Earth leader Dylan Carlson makes the most of his appearance, doing his cowboys-in-hell guitar thing all over the 28-minute "Her Eyes Were Wet With Venom," a bonus track only available on the limited edition two-CD version, which is well worth tracking down.
Posted by Phil Freeman at 2:13 PM