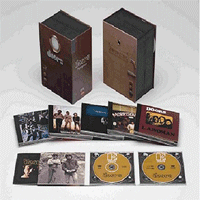 Let's pretend the Doors are not one of the most overplayed bands in that wasteland of sonic saturation, classic rock radio. Let's also pretend that deluxe, super-fancy boxed sets like this one are not aimed at middle-aged, deep-pocketed fans who already own most of the music within them in at least one other format—that, instead, they're about bringing an artist's or band's music to brand-new listeners in the most efficient manner possible.

Given those two conditions, what do we learn about the Doors by going track-by-track, album-by-album through the six CDs that constitute Perception? The first notable fact that leaps out at the listener is that the Doors discography is pretty much split between three very good albums and three pretty bad albums, and the running order must have been seriously discouraging in real time, because the debut was great, but the three discs that followed it were disappointments, with a few interesting ideas scattered among them. So only diehards were still paying attention by the time the final two discs—Morrison Hotel and L.A. Woman—dropped in '69 and '70. Those two albums, though, showcased a muscular band toughened up by misguided experimentation (on the schizophrenic The Soft Parade in particular) and transformed into a blues-rockin' machine with a little of what would soon become prog-rock sprouting in the corners of their sound.

Jim Morrison was a pretty good singer, especially when he let his Florida redneck background seep around the edges of his Sunset Strip Dionysus mask. Still, do yourself a favor—ignore the lyrics and listen to the band. The Doors could really play, in a variety of styles—the Latin jazz instrumental "Push Push," one of the many outtakes here, and the disco breaks on "The Soft Parade" are about as far from "Light My Fire" as one can get. Furthermore, the album cuts are frequently more impressive than the singles. "The Changeling," a Junior Walker steal that opens L.A. Woman, is the equal of the album's title track, and would have made a much more impressive single than the portentous "Riders On The Storm." Yeah, this band the Doors, they're not geniuses or anything, but they've definitely got their moments.
Posted by Phil Freeman at 7:30 AM