SON OF A COLTRANE

[From the Riverfront Times.] 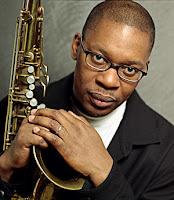 "I've always avoided situations that reeked of that nostalgic/exploitive, son-of-Coltrane thing," says saxophonist Ravi Coltrane. That's no easy task for the son of John, one of jazz's true legends — especially in a business that only seems able to sell new jazz by relating it to the past. But this mindset makes his seeming ambivalence about the Blue Note 7 project somewhat understandable.

"When I got to New York, the bands I was playing in were all guys doing original music, and most of the tunes I'm playing on this tour are tunes I last played when I was in college," says Coltrane with a laugh. (One exception is Joe Henderson's "Inner Urge," which Coltrane previously recorded on his debut CD as a leader, 1998's Moving Pictures.) Still, he understands why jazz fans respond so rapturously to history-minded albums and performances: "There's nothing wrong with sitting down, paying for something and knowing exactly what to expect and getting it."

But in his solo career, Coltrane has deliberately turned his back on that sort of thing. Aside from working on his mother Alice Coltrane's 2004 comeback album, Translinear Light, and recording two of his father's lesser-known tunes on 2002's Mad 6, he's avoided making family connections — even musical ones — explicit. There is no Ravi Coltrane Plays John Coltrane album out there, and there likely never will be.

But Mosaic — which reunited Coltrane with Payton, whom he played with in Elvin Jones' band in the early 1990s, as well as with former sessionmates Nash and Washington — is a strong album that will easily outlast the corporate self-celebration that spawned it. The saxophonist admits as much when he says, "Somebody might say, 'I have this idea and it's gonna involve this [person] and this [person] and this [person],' and I might say, I don't like your idea, but this person'll be involved. So sometimes, if there's a musical reason for doing those types of gigs, regardless of the names and all that stuff, then the value is there."
Posted by Phil Freeman at 6:07 AM

I like that headline - very funny. I gotta say its really weird watching this band play (so far I've only seen this clip by jazzvideoguy Bret Primack). It's a very strange mix of musicians which I don't think totally makes sense. (Ravi Coltrane with Bill Charlap? Huh?). But hey, they're all probably making good bread. And that's what it all boils down to being a jazz musician these days. However it is a pleasant enough record - no doubt about that. But neither "killing" nor essential to one building a jazz library.

Coltrane all but straight-up told me he was doing it for the money. I kinda toned it down for the piece, because calling his feelings "ambivalent" would be putting it extremely kindly.