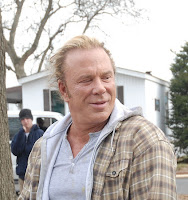 I don't watch wrestling, though I know at least one very smart person who does. So I don't look down on professional wrestlers or their fans, but neither do I consider the form to be hidden art or in any way deeply meaningful. Consequently, I went into The Wrestler (which I saw two radically different versions of - one sliced 'n' diced on an airplane, with all the nudity and profanity and much of the blood excised, and the real version on DVD from Netflix tonight) neutral. I wanted to see it for a couple of reasons:

1) I still really like Darren Aronofsky's Pi and think of Requiem For A Dream and The Fountain as noble failures, and

2) like the rest of the American moviegoing public, I've been browbeaten into accepting that Mickey Rourke is a national treasure and a glorious comeback story.

Well, I've come away from my second viewing of The Wrestler with decidedly mixed feelings. (The person with whom I watched it was much more unequivocally negative.)

I feel like a lot of Aronofsky's aesthetic decisions were made based on unconscious class biases, from the hand-held camera and stark lighting to the decision to set it in New Jersey - specifically, the part of New Jersey where I live. The titty bar where Marisa Tomei's character grinds out her oh-so-miserable existence, being humiliated by frat boys and having her offers of a lap dance rejected? I drive past it about once a week, if not more. The thrift store she and Rourke's character visit to buy clothes for his estranged daughter? I've never been in there, but I know where it is. Hell, I could probably find the anonymous small-town street the girl playing the daughter is supposed to live on if you gave me a couple of hours.

It's not the NJ = hell shorthand that bugs me, though; I was born in this state, I'm used to that, and the parts of the movie that are supposed to look like some kind of blighted, soul-crushing, post-industrial wasteland? I'm pretty happy here, so fuck y'all. No, what bothered me about the movie was all the other short cuts Aronofsky took, and the opportunities he missed in the process.

Here are the things we're never told, that I would have liked to know:

> What happened to Rourke's wife or girlfriend or whoever the mother of the aforementioned estranged daughter was?
> How does Rourke pay for all the medication he gets after his heart attack? Professional wrestlers don't have health insurance - it's kind of a major issue within the industry - and he can't even pay the rent on his trailer, as is revealed early in the film.
> What happened between the glory years of the opening credits and the squalor of the movie's present day? We get a single line of dialogue in a bar - "The '90s fuckin' sucked" (a statement I don't disagree with, at least as far as the virtues of '80s metal vs. grunge, which is the context in which it's made) - and that's it. I would have liked some glimpse of the two decades the movie just skips right past.

The Wrestler was a good idea for a movie. Aging athletes (and yes, wrestling is a highly athletic, extremely physically demanding profession), or aging anyone who makes their living with their physicality, for that matter, are an interesting subject for a potentially poignant story. The gradual development of the relationship between Tomei and Rourke could have really been something - they're both good actors and did as much as possible with the material they were given. But Aronofsky went for shorthand. Faded star, one last shot at a comeback, makin' things right with the estranged daughter...it's all movie of the week blah blah blah. Aronofsky seems incapable of presenting any of his characters as having an inner life. Rourke's daughter and Tomei's son are ciphers, there to move the plot along and nothing more. Similarly, Rourke's conflict with his boss at his day job seems trumped-up; the guy's a prick for no reason at all, except that a later outburst requires provocation.

There are good things about the movie, of course. Rourke's work in scenes with other wrestlers is terrific; the clearest insight we get into his character comes when he's advising a younger wrestler to stay in the game and complimenting him on his technique. He really does disappear into the persona of Randy "The Ram" Robinson in those scenes. The wrestling matches are well shot, even the gory one that precipitates Rourke's health crisis. And I liked hearing a lot of the music; Accept's "Balls To The Wall" is just a good fucking song.

But final verdict? I think Darren Aronofsky is a Brooklyn hipster slumming with little or no understanding of the working-class culture of wrestling and wrestling fandom, and while I think his intentions were good, his unconscious class biases turned The Wrestler into a parade of cardboard cutouts instead of the nuanced portrayal of realistic human beings it could have been.

P.S.: I never thought I'd find myself saying this, but Armond White's take on this movie is well worth reading.
Posted by Phil Freeman at 8:00 PM