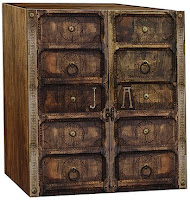 JANE'S ADDICTION
A Cabinet of Curiosities (Rhino)
Now that Jane's Addiction has reunited for real (without original bassist Eric Avery, there is no Jane's), it's box-set time. A Cabinet of Curiosities gathers many of the band's demos (some of which padded out CD singles — remember those? — back in the early '90s), a compilation track or two (covering Sly and the Family Stone's "Don't Call Me Nigger, Whitey" with Ice-T on co-lead vocals was a decent idea badly executed, but their take on the Grateful Dead's "Ripple" is pleasantly bucolic), and a DVD full of videos and live footage. But disc three (of four) is the real jewel — an entire live show recorded at the band's absolute peak, in its L.A. hometown just before Christmas 1990. Raucous, psychedelic, metallic, arty and loose, this 76-minute performance proves for all time that Jane's Addiction was one of the best bands in the "alternative nation." They had something special, and yet they haven't been as influential as they should have been — maybe 'cause the grunge bands came along and bummed everybody out.
Posted by Phil Freeman at 7:34 PM