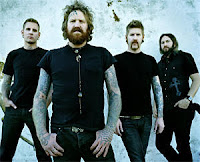 Despite the trend in consumer downloads, singles are for dilettantes. Full albums are still where a band's real art lies. That's a point many musicians are out to prove, anyway, and in recent years there's been a concerted effort across genres — from Jay-Z to Slint — to further impress that idea by mounting tours focused on entire records.

Thus far, single-album shows have been best received as exercises in nostalgia, and not simply as forced exposure to new material. In 2006, Iron Maiden infuriated fans by grinding through its then-new, 75-minute A Matter of Life and Death, denying the crowd the greatest hits they'd come for. Judas Priest backed down from its threat to mount a full-scale rock-opera production of last year's double disc, Nostradamus. Artistically fearless metal band Mastodon is one of the few younger acts to concentrate on a full record live. The Georgia-based band will perform its fourth full-length, the epic concept album Crack the Skye, from front to back on its spring tour.

As Mastodon's guitarist, Bill Kelliher, tells it, the group had no choice but to give a seamless rendition of Crack the Skye. "It's hard to pick two or three songs off the new album and fit those into our set," he says. He kinda has a point, given that it marks the band's emergence as full-on prog-rockers.

Each of Mastodon's four albums has been a little less brutal than its predecessor. The band's full-length debut, 2002's Remission, seemed to pursue heaviness for its own sake, while 2004's Leviathan was intricate and thoughtful, a leap forward in both concept and execution. The group's major-label debut, 2006's Blood Mountain, was even artier, featuring guest appearances by members of the Mars Volta and Neurosis. Crack the Skye is the next logical step, containing seven sprawling songs that tell a story of astral projection, the Russian monk Rasputin, and cosmic wormholes.

Two hard-rocking, melodic tracks in a row ("Oblivion" and "Divinations") kick things off strongly, but slowly. Organ-driven meditations dominate, and the guitar solos are more reminiscent of Pink Floyd than Metallica. "The Czar" passes through four distinct movements, some raucous and others ornate and beautiful, over the course of nearly 11 minutes. And album closer "The Last Baron" is another sonic saga that mixes thrashy riffing with tempo changes worthy of '70s Genesis or Yes.

Cynics might ascribe Crack the Skye's clean guitar tones and even cleaner vocals to the use of producer Brendan O'Brien, who has worked with Pearl Jam, Tom Petty, and Bruce Springsteen. The band was unsure about that decision at first. "We were a little hesitant," Kelliher says. "It was like, 'Has he ever done a heavy band like us?'" But O'Brien's ear for melody wound up serving Mastodon well. The instruments are perfectly balanced, giving the disc a beauty modern metal frequently ignores in favor of sonic punishment. The guitarist admits that O'Brien "kinda saw through the clouds" when it came to recording.

The question is, can Mastodon persuade fans paying to hear longtime favorites like "The Wolf Is Loose," "Mother Puncher," or "Blood and Thunder" to wait through seven brand-new songs in a row, two of which pass the ten-minute mark? Kelliher is confident the shows will be musically impressive and entertaining. "It's gonna be quite a lumbering task, but I think we can do it with enough practice," he says, adding that the tour will also feature a strong light-show visual component. Instrumentally, Mastodon is augmenting its usual four-piece lineup with a keyboardist. Unlike, say, Black Sabbath, the band won't force him into hiding through synth-denying headbanger machismo. "He'll be onstage somewhere," Kelliher laughs. "We'll admit" to using keyboards.

As for Mastodon's "greatest hits"? Those songs will still be heard before the night is over. As the guitarist points out, Crack the Skye is only 50 minutes long, which leaves plenty of time for "a handful of oldies but goodies."
Posted by Phil Freeman at 6:17 AM