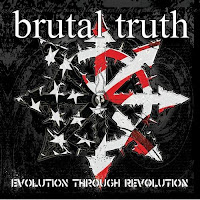 BRUTAL TRUTH
Evolution Through Revolution
Relapse
Grindcore tends to be as musically minimalist — faster! faster! — as it is politically black and white. But within the genre's narrow confines, Brutal Truth has always been a band of weirdos and innovators, importing instruments (from saxophone to didgeridoo) and offering near-ambient interludes between blast-beat-driven explosions. On this album, the instrumental "Semi-Automatic Carnation" and the damn near epic (by grindcore standards) "Afterworld" and "Grind Fidelity" allow BT to stretch out and slow down. They know that's not what people want to hear, though, so it's quickly back to machine-gun-assault mode. Eleven of Evolution Through Revolution's 20 tracks are less than two minutes long; six come in under the 90-second mark. After all, if you need more than 49 seconds to express the core concept of a song called "War Is Good" (some irony there, probably), you're doing it wrong. Possibly the biggest surprise here is a cover of the Minutemen's "Bob Dylan Wrote Propaganda Songs," which is all the more unsettling when you notice how much vocalist Kevin Sharp looks like former Minutemen bassist Mike Watt these days.
Posted by Phil Freeman at 6:11 AM