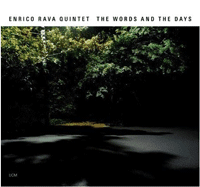 ENRICO RAVA
The Words And The Days
ECM
Italian trumpeter Enrico Rava's discography is both wide and deep, encompassing sessions as free as Manfred Schoof's 1969 classic of blare, European Echoes, and Cecil Taylor's Winged Serpent from 1984, as well as a long history with ECM, having first recorded for them 32 years ago on 1975's The Pilgrim And The Stars.
This disc, his eighth for the label and his second since re-signing in 2003, features a working band of younger Italian musicians, including trombonist Gianluca Petrella, pianist Andrea Pozza (replacing Stefano Bollani), bassist Rosario Bonaccorso, and drummer Roberto Gatto. Rava's tone is rich and full, and he's shadowed throughout by Petrella - one man in the left speaker, the other in the right to beguiling effect.
Petrella's growling, sputtering solo on the irresistibly grooving "Echoes Of Duke" is one of the highlights of the album. It's followed by stream after stream of rippling high notes from Rava, asserting, in case anyone forgot, just whose album this is. But every member of this band gets spotlight time, bassist Bonaccorso most notably of all: "Sogni Proibiti" ("Forbidden Song" for you non-Italian-speakers) is a two-minute bass solo, effectively leading into the lush ballad "Todamor," that's reminiscent, in its powerful strumming, of Jimmy Garrison's work with John Coltrane.
At 12 tracks in just over 72 minutes, it could be argued that The Words And The Days is a touch long. But trying to choose which of these beautiful performances to chop away would be close to impossible. 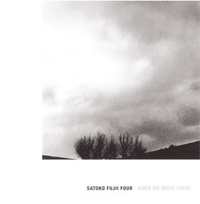 SATOKO FUJII FOUR
When We Were There
Polystar
Pianist Satoko Fujii and trumpeter Natsuki Tamura (her husband and creative partner) are staggeringly productive, and their eclecticism is almost as determined as their profligacy. While her various orchestras (she operates four, one in New York and three in Japan) frequently traffic in long-form compositions or marathon improvisations, when the groups get smaller, so do the pieces.
When We Were There teams Fujii and Tamura with bassist Mark Dresser and drummer Jim Black, both Americans, for an 11-track set of remarkable concision. only three tracks pass the five-minute mark, one being the 15-minute finale, "A Diversion." The whole album runs just under an hour. "Sandstorm," the 2:31 opener, comes in hard and whirls around the listener's head much like its namesake. The title track, by contrast, centers around a pulsing piano line and Latin rhythm.
Other tracks shift from slow, chamber-like interactions to ultra-abstract soundscapes - "A Path Through The Garden" includes passages where Dresser's bowed bass is a distant scrape, and Black's drums sound like they're being dusted rather than played. Track 10, "Inori," is a three-minute miniature that finds Tamura and Dresser playing near-unison phrases, and its delicate finality serves to separate everything that came before.
Fujii doesn't typically specialize in Cecil Taylor-esque tsunamis of notes. Most of When We Were There is more reminiscent of a disc like Matthew Shipp's New Orbit, her interaction with Tamura mirroring Shipp's precise figures, which landed like raindrops around Wadada Leo Smith's bleary trumpet lines. On "Runaway Radio," though, Fujii rumbles around the keyboard's low end to powerful effect, and "A Diversion" surges and recedes repeatedly during its allotted quarter hour. This disc combines its miniatures into a unified whole, then caps everything off with a truly grand finale. It's one of Fujii's most satisfying releases.
Posted by Phil Freeman at 7:54 AM