THIS MONTH IN METAL MANIACS 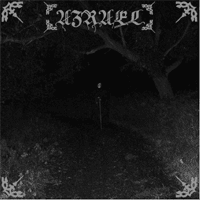 AZRAEL
Act III: Self/Act IV: Goat
Moribund Cult
The most fascinating aspect of black metal, at its best, is its seeming opposition to what prior generations grew up believing to bhe the core values of metal. Not the whole Satan thing. In that respect, the face-painted forest trolls are way at the back of a long, long line. But anybody who thinks of metal as being fundamentally about transcendence, catharsis, being larger than life - whether that's communicated through instrumental virtuosity, rafter-shaking vocal power or generally via bandmates' collective interaction - has to feel like black metal, so frequently created by bedroom loners these days, is a conscious rejection of all these values. Riffing is primitive, mixing is blurry, vocals are incomprehensible howls mutated by effects. Azrael is a duo, not a solo act, and vocalist/guitarist Lord Samaiza and bassist/drummer Algol are determined to outdo their contemporaries. These two discs are extremely well recorded by the standards of the genre. Algol's drumming, in particular, is crisp and powerful throughout. The cymbals are superbly recorded, never disintegrating into a messy, oversaturated hiss. Samaiza's not content to limit himself to the genre's usual fuzzed-out guitar tones, either, doubling his lines on acoustic just as Algol plays upright bass on a few songs. The vocals are incomprehensible croaks, and there are no lyrics in the booklet, but that only winds up making the music - progressive and often quite beautiful - easier to focus on. These guys are serious artists, operating on a level far beyond most of their contemporaries. They're too profligate for their own good, of course. Two 64-minute CDs is a lot to offer even to devoted BM listeners. But spend a week or two dipping into this overflowing offering and you're sure to come away satisfied.
Posted by Phil Freeman at 9:30 AM