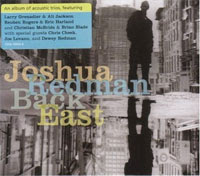 JOSHUA REDMAN
Back East
Nonesuch
This album's title is thickly layered with meaning. It represents California native Redman's return to the East Coast for the sessions. It also nods toward the multiple tracks ("East Of The Sun [And West Of The Moon]," "Indian Song," the title track," "Mantra #5," "Indonesia" and a take on John Coltrane's "India") that reference the East and Eastern spirituality. Being Joshua Redman's first acoustic trio album, it's also a joking reply to Sonny Rollins' classic Way Out West. Indeed, two tracks from that album, "Wagon Wheels" and "I'm An Old Cowhand," are performed here by Redman and one of the three different rhythm teams he deploys on the disc.
While not as overtly spiritual or as out as Kenny Garrett's recent Beyond The Wall, this is definitely one of Redman's finest hours. The rotating personnel - and the trio of guest hornmen, including Redman's late father on the album's final two songs - indicate some uncertainty about his strategy, but the leader shouldn't have worried. His tone is rich and full, and he holds his own with everyone he's invited to the studio. The two encounters with Dewey Redman are fascinating - "India" in particular, beginning as it does with unaccompanied saxophones before the instantly recognizable bassline comes in. The two men's voices on the horn are superficially similar, but their ideas aren't, and it's a shame the producers chose to fade out this brilliant father-son moment after only five minutes. The tender ballad "GJ," a showcase for Dewey, closes the disc in fine style.
Posted by Phil Freeman at 12:17 PM