METALLICA: FUCK YOU, IT'S GREAT 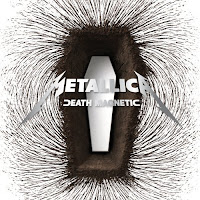 So Death Magnetic leaked last night, to no one’s great surprise. The narrative being pushed is that a French record store got copies early and began selling them, and now it’s out on the net courtesy of some customer. I don’t think that’s what happened at all. I think, as is so often the case, it was leaked by someone on the inside. But however it happened, the music’s out there, and now it’s time for everyone to have their say.

I think Metallica’s in a tough spot with this album. A lot of people these days seem to hate them, or at least get off on abusing them online. They get ridiculed for obvious missteps like Some Kind Of Monster as brutally as for totally extramusical “offenses” like the photo of James Hetfield, Rob Trujillo and their wives or girlfriends or whoever out shopping in shorts and sandals. And I think it’s time motherfuckers backed off a little. Fine; Load and ReLoad were not good albums, and S&M was an interesting idea, less than brilliantly executed. But you know what? I’ve spent a fair amount of time listening to St. Anger over the past couple of months, sort of psyching myself up/steeling myself to the reality of Death Magnetic, and it’s a much more interesting album than I remembered it being back in 2003, when I listened to it once at the label’s offices, went back to my office and wrote a scorching review that got reprinted in about ten alt-weeklies across the country and probably earned me a spot on Lars Ulrich’s enemies list. I’m not gonna go into total historical-revisionism mode here and now, but trust me: There’s a lot to like about St. Anger. Go back and listen with an open mind, and when you’re listening to it, remind yourself that it’s not about you. They didn’t make that album to fuck with longtime fans, and they didn’t make it by accident. They made it because it was the album they wanted to make, and it sounds that way (right down to Lars’s drums) because that’s how they wanted it to sound. If you don’t like it, that’s your business, but they weren’t thinking about you when they made it. And here’s the really interesting thing – it now stands revealed as an album that must be heard in the light of Death Magnetic. Not because the new album is a sequel, but rather because DM doesn’t sound anything like Anger.

What it does sound like is a confident, artistically mature metal band that’s no longer running scared. The advance quotes about how the band was attempting to go back and rediscover their 1986 selves? Not entirely bullshit. But that’s not the whole story, not even close.

What Metallica’s done is write a bunch of riffs that sound like outtakes from Master Of Puppets and …And Justice For All, and interweave them with riffs from the boogie-rock version of Metallica that made Load and ReLoad. And more often than not, it works. The album’s first three songs, “That Was Just Your Life,” “The End Of The Line” and “Broken, Beat & Scarred” are all fast, tough thrashers with killer guitar solos and exactly the mix of riffs I described two sentences ago. Things start off with a heartbeat, and some melancholy guitar straight off the Black Album, but then we’re off to the races, the riffage sawing away at your ear as Hetfield barks like a demented auctioneer. If “That Was Just Your Life” was five minutes long instead of seven, it would be a total victory. The same is true of the next two tracks, which are just under eight and six-and-a-half minutes long respectively; only a failure to edit, not weakness of fundamental structure, keeps them from being classic Metallica anthems. Pretty much every song on this album is, if not a home run, at least a triple. Even “The Day That Never Comes,” which I didn’t much like as a first single (I would have preferred they come out of the gate with “Cyanide,” and now that I’ve heard it, “The End Of The Line” would be a good choice, too), works better within the context of the album as a whole. And the closing one-two punch is phenomenal: Just as they did on Master Of Puppets and …And Justice For All, they end this disc with an extended instrumental, the 10-minute “Suicide & Redemption,” followed by the headlong, crushing “My Apocalypse.”

Death Magnetic is a unified, solid album, something you can’t really say about St. Anger or the Loads. The only song that disrupts its flow is “The Unforgiven III,” which brings in piano and cellos for a sort of Ennio Morricone feel – no surprise, given that they’ve come onstage to the composer’s “The Ecstasy Of Gold” for years. No, it doesn’t stay in that territory; it’s “Unforgiven III,” not “Nothing Else Matters II,” and it gets heavy as fuck by the end, while retaining a cinematic grandeur. It’s far from a bad song, but trilogies are a bad idea, and the melody and mood this new chapter offers would probably work just a little better if it was allowed to stand on its own, rather than being shackled to the half-decent original song and the wretched sequel.

There’s something else important about this album – it sounds like a band. Like four people playing music in a room. A big, reverby room, sure, but still, there’s an organic feel here that’s impossible to deny. Rick Rubin’s hippie-Zen, absentee-landlord approach to the studio is the butt of lots of jokes (including some from artists he’s “produced”), but he got ten truly strong performances out of Metallica, so credit where due.

And that brings me to the last thing I want to talk about, which is what Death Magnetic says about St. Anger. There are three immediately discernible differences between this album and the last one: Hetfield’s vocals, Ulrich’s drums, and Hammett’s guitar. There are solos (lots of ’em, and damn good ones), the snare sounds like a drum instead of a trash-can lid (indeed, the kit is recorded super-dry, for a sound that reminds me of the early ’90s work of New York art-thrashers Prong), and James has recovered his ability to stay on pitch. Which reveals something we should have known all along: that he let his voice crack and go raw on St. Anger because his delivery of that album’s lyrics was as much a reflection of his inner turmoil as the words themselves. That’s why the drums sounded that way, that’s why there were no guitar solos - St. Anger was about pain. Relentless pain, with no relief. Metal’s punishing, repetitive riffs build tension, which is relieved through the catharsis of the solo. Metallica weren’t interested in offering catharsis last time out – they wanted to shove our faces in their pain. Not so this time. It’s clear to me after only two-and-a-half listens to Death Magnetic that Metallica have emerged from a defensive crouch they’ve been in for years, and it’s good to have them back. This album is like an armadillo unrolling itself to reveal a dragon. Real metal’s been on the upswing lately, with older bands delivering massive albums and new bands building on tradition in thrilling ways. Death Magnetic goes on the shelf alongside Iron Maiden’s A Matter Of Life And Death, Testament’s The Formation Of Damnation, and Judas Priest’s Nostradamus: I didn’t think they still had it in ’em, and I’m really glad they do. I haven’t loved a Metallica album since …And Justice For All, but Death Magnetic is very likely to wind up being my Album of the Year.
Posted by Phil Freeman at 5:08 PM

Your comments on St. Anger are exactly as I feel. I recently revisited the album and was surprised that I flung it out the window (quite literally) in 2003. It's now in my rotation for regular play.

As far as Death Magnetic goes, I was expecting way less. I remembered being disappointed in 2k3 and I was set up for disappointent again, but I decided to give it a shot. I'm very happy that I did, I got goosebumps when I heard the guitars hit after then intro. Metallica's back. As back as they ever will be at any rate.

I love the new album, and will be listening for years to come.

It a great album, they tried to return to the old Metallica, but I think that from the black album they were just making records to sell, just like ads of Generic Viagra, they preferred to sell than to create better music.