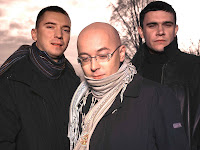 Polish pianist Marcin Wasilewski and his partners - bassist Slawomir Kurkiewicz and drummer Michal Miskiewicz - make up one of the most interesting trios on the ECM label at the moment. Originally known as the Simple Acoustic Trio, they're now named after the pianist - for reasons of convenience.

"It was the suggestion of the producer [and ECM label head] Manfred Eicher, to put my name as the band name, but nothing changed really between us," Wasilewski says. January is the group's second ECM release, following five hard-to-find, Poland-only discs and 2005's label debut, Trio. Devoted fans of Polish jazz, though, will know these three musicians quite well: They've backed trumpeter Tomasz Stanko since 2002, appearing on The Soul Of Things, Suspended Night and Lontano.

Stanko's influence weighs heavily on the band, although the lessons the've learned from him assisted in developing their own group identity. "We played many, many years together, so Stanko was very important for us, and still is, as a great artist and a great musician," Wasilewski says. "We had the opportunity to play a lot with him onstage, practicing by playing concerts, of course, which is the best and fastest way to be a better musician. It's almost the same but not the same, the music [we made] with him and as our own band. Of course, we use the same ways of improvising that we learned with him, but there's no trumpet and there's no Tomasz Stanko music."

The quality Wasilewski and company share most strongly with their former boss is a meditative, almost somnambulistic approach to melody and rhythm. Their compositions drift slowly along, building like mist rising off the ground at midnight. The difference between European jazz and American jazz has been discussed at length in many venues, but January is a particularly crisp example, making melodic improvisation rather than muscular swing the point of the exercise. Does Wasilewsky think there's a fundamentally different approach to the question of swing in Europe?

"I think there is, but I don't know if it's good or bad," he says. "It doesn't matter, because now jazz is very international. Of course, it started being played in the States, it's original American music, but it's a mix of European culture - and European instruments, of course. There are some differences, of course, in the rhythmic approach, especially by black musicians. They're more focused on playing rhythm, which is very important when you play jazz. But at the same time, jazz is not only rhythm, so European players put a little bit of rubato tempo and more connection with classical roots and classical music. So I think it gives us a lot of interesting mixtures to connect to things."

Despite their somewhat restrained, archetypally European (not to say archetypally ECM) approach to jazz, the trio has a few surprises up their sleeves. One of the biggest is their version of Prince's "Diamonds And Pearls," which undergoes a thorough and revelatory transformation on January.

Why Prince? "It was a very spontaneous thing," Wasilewski says. "A couple of days before I left to record in New York, I bought the CD Diamonds And Pearls, thinking, 'Yeah, I remember this from the past.' So I put it on a tape recorder, and I was so excited to listen to this. I was dancing, packing my stuff, preparing some music notes, and I thought, 'Oh, maybe I'll play this melody.' I asked my sister, and she said to just learn the simple main melody. I added some chords, and on the second day of session, I said to Slawomir, 'Let's hear this song "Diamonds And Pearls,"' and Manfred asked, 'Do you have something else you want to do?' So we got it on the second take. We did the main theme, 'Okay, let's play solo on this chorus,' and it was done on the second take."
Posted by Phil Freeman at 7:46 AM