THIS MONTH IN JAZZIZ, PART 2 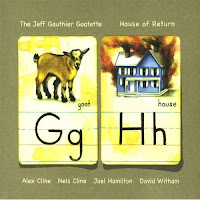 JEFF GAUTHIER GOATETTE
House Of Return
Cryptogramophone
When attempting to get an indie avant-jazz band recorded, it helps if you own the label. But Jeff Gauthier's goatette could stand on its own even if Cryptogramophone weren't his imprint. The violinist's group features pleasingly omnipresent guitarist Nels Cline and his drummer brother, Alex, alongside bassist Joel Hamilton and keyboardist David Witham.

The gentle, soothing opener, "Biko's Blues," predicts a relaxing trip drifting downriver. But the second track, "Friends Of The Animals," quickly demonstrates why Gautier, Witham and Nels Cline are all credited with "effects," as the ensemble transforms into an unholy, heart-pounding amalgam of Mahavishnu Orchestra, Weather Report and Sonic Youth. Cline's distorted guitar lines meld with Gauthier's electrified violin and liquid organ lines from Witham, while Alex Cline's home-run swing drives it all.

Unfortunately, "I.O.A.," "House Of Return," and "Dizang" follow and taken together, create a pastoral atmosphere that lingers for the next half hour. But eventually, the album regains momentum with "Satellites And Sideburns," so named because it sounds like a combination of '70s Miles - Gauthier's violin imitates a wah-wah trumpet quite well - and instrumental Frank Zappa. Finally, a drum solo by Alex Cline concludes the album with something between an avalanche and a demolition derby. Members of the Goatette wore their influences like merit badges while producing this highly rewarding work.
Posted by Phil Freeman at 7:59 AM