[From the Cleveland Free Times.] 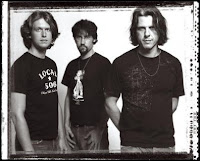 Alex Skolnick Trio
Wilberts (812 Huron Rd. E., Cleveland, OH)
Now that skunk-striped shredder Alex Skolnick is back with Testament, the Bay Area thrash band that brought him to worldwide fame, he might not have as much time for this project. That'd be a shame. The Alex Skolnick Trio is an instrumental outfit, but calling it "jazz" would do its innovative and unique sound a disservice. Not only does the guitarist nod to his other career on the Trio's latest album, Last Day In Paradise (it reworks Testament's "Practice What You Preach" and Rush's "Tom Sawyer"), but on tracks like "Western Sabbath Stomp" and "Mercury Retrograde," he proves himself a master of tone and technique, easily the equal of Bill Frisell or any other post-jazz six-stringer. His bandmates, bassist Nathan Peck and drummer Matt Zebroski, are no slouches either, expertly switching up rhythms and grooves to keep listeners guessing and rocking at the same time. You might be drawn in by the novel prospect of seeing a metal hero play "jazzy" versions of "Iron Man," "Detroit Rock City," "Don't Talk to Strangers," et al., but by the end of the set (or one of the three CDs), it'll be the originals - and the Trio's overall originality - that earn your respect.
Posted by Phil Freeman at 7:04 AM