RUNNING OUT OF TRICKS 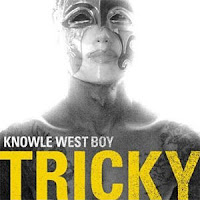 Knowle West Boy doesn't break that disappointing pattern. "Council Estate" and "Coalition" crank up the guitars and the yelling, and almost rock – but in the end they're barely convincing. And those are the standout tracks. For the most part, this disc is just more latter-day Tricky, the claustrophobic and compelling paranoia of his early days toned down to a grumpy mutter as the music jumps among styles (barrelhouse piano and blues riffs on the opening "Puppy Toy"; postpunk guitar noise, bass throb, and one-finger synth lines on "Far Away"). Like most other post-hip-hop producer-artists, Tricky occasionally forgets that a beat is not a song, as on "Veronika," which features the titular girl singing, halfway to herself, like a young, more human Grace Jones. This Veronika (last name Coassolo, formerly of Disco Inferno and ToyTunes) is just one of many guest players here, making Tricky seem like an interloper on his own album.
Posted by Phil Freeman at 6:42 AM