"WHAT KIND OF CLOWN ARE YOU?" "THE CRYING-ON-THE-INSIDE KIND, I GUESS."

[Another new outlet: This is my first piece for the Denver alt-weekly Westword.] 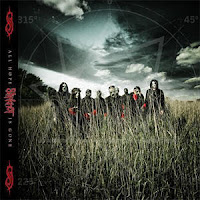 SLIPKNOT
All Hope Is Gone
Roadrunner
Four albums in (five, if you're an eBay-stalking obsessive), Slipknot is having an identity crisis. Frontman Corey Taylor's side project, Stone Sour, has allowed him to unmask his sensitive singer-songwriter side, and that's well represented here on "Snuff" and "Dead Memories" — the former a half-acoustic ballad, the latter a slab of post-grunge radio rock. Guitarist Mick Thomson and drummer Joey Jordison, on the other hand, have death-metal dreams; there are double-kick drum explosions and widdly guitar solos all over this record, including some serious whammy-bar abuse on "This Cold Black." The explosive rage of old is now tempered by the wish to mature — no surprise, given that all nine are in their thirties, but potentially alienating to their younger, eternally pissed-off fans.

[Also reprinted in the Dallas Observer.]
Posted by Phil Freeman at 3:37 PM