BUILT FOR THE LONG HAUL

[Here's the SF Weekly piece for which I conducted the Steve Albini interview a little further down the page.] 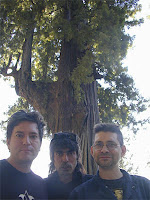 Renowned audio engineer Steve Albini has spent most of the last two decades running hundreds of recording sessions out of Chicago's Electrical Audio studios. Music geeks know about his work on totemic alternative rock albums like Nirvana's In Utero, PJ Harvey's Rid of Me, and most of the Jesus Lizard's '90s catalog. But young independent musicians wouldn't be lining up at his doorstep if Albini's work with his own bands, from Big Black to Rapeman to Shellac, weren't so stellar.

Shellac, which released its fourth full-length, Excellent Italian Greyhound, in 2007, plays minimalist rock that's noisy without being noise-rock. The group is frequently instrumental, but just as capable of affecting balladry and arty, complex structures. The aggression of the ranting "My Black Ass," which opened the group's 1994 debut album, At Action Park, is matched by the introspective explorations of "Didn't We Deserve a Look at You the Way You Really Are," the first track off 1998's Terraform. Albini plays guitar like he's cutting the strings with tin snips, while Bob Weston's muscular basslines bounce like telephone cables. Behind them, Todd Trainer thumps the drums with a hard rock groove and a Neanderthal single-mindedness.

Live, the band members are showmen without making a big deal of it. Most sets include a Q&A with the audience while Albini tunes his trademark Travis Bean aluminum guitar, and songs frequently mutate. "There's a large improvisation element," he explains. "We play different notes, I sing different words ... literally every thing about [a song] is substantially different, but we still think of it as the same song."

The band also tends to present unreleased material onstage. Seven years passed before Excellent Italian Greyhound succeeded its immediate predecessor, 1000 Hurts, but many of the songs on Excellent had been fixtures of the live set for years. There's material in the hopper in '09, though no plans to record just yet. "We want to make sure we're not making some mistaken choice just for the expedience of getting something recorded," Albini says. "We want to make sure that the stuff we're playing holds up."

Albini applies the same approach to the studio work he does for other artists. He prides himself on not exerting undue influence over the bands he records, preferring to trust that they know best what their music should sound like. "If you go to the barber to get your hair cut, you should be able to tell the barber how you want your hair cut," he says. "And when a band comes in the studio, they should tell me how they want their record to come out."

He's also defiantly analog, recording on tape instead of into Pro Tools, and eschews the artificially loud mixes that have ruined much modern rock — the result being that while radio probably won't play most of the albums he produces, the musicians and their fans will. "The band will have that record in their legacy, and they should be able to be proud of it," he says.

This straightforward, old-school approach has earned Albini a sterling reputation and helped Electrical Audio stay recession-proof. While it seems that everywhere you look these days, someone is crying bitter tears over the slow-motion death of the music industry, Albini doesn't seem worried about his end of the business. His clients are independent bands and labels, and he also earns "a very small amount of money from big labels putting out big-scale records. So we haven't really been affected by the collapse of the bigger, mainstream music industry."

As Albini points out, he's part of a larger network of artists who take responsibility for their own success — the musicians promoting their work on MySpace and Facebook, the clubs providing stages to tiny bands that will never break out of their local scene, yet persist nonetheless. And as long as those acts can pay the surprisingly small fee he charges ($700 a day for engineering, $400 to $600 per day for studio time), Albini will help them get their work on tape. Real tape.
Posted by Phil Freeman at 6:40 PM