THIS MONTH (QUARTER) IN JAZZIZ

The jazz business being what it is, Jazziz has gone quarterly. I've got three reviews in the brand-new summer issue, which is the first on the new schedule; consequently, some of these albums have been out for awhile. Anyway, here they are. 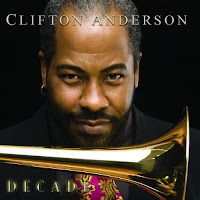 CLIFTON ANDERSON
Decade (Doxy/Emarcy)
Clifton Anderson is not only Sonny Rollins' touring trombonist, he's also the saxophone legend's nephew. Decade, Anderson's second recording as a leader, appears on Rollins' Doxy label, and Rollins gets an executive producer's credit. About the only thing Rollins doesn't do is turn up for a guest solo. Nevertheless, the album offers some return on listeners' investment - about 40 percent worth, in fact.
Decade's 10 tracks are divided between two bands. Six tracks feature pianist Larry Willis, bassist Bob Cranshaw and drummer Al Foster, while the other four place Stephen Scott, Christian McBride and Steve Jordan in those positions, respectively. The latter band offers a more aggressive and stylistically adventurous approach, playing at a breakneck pace on album closer "Stubbs" (which also boasts alto-sax work from guest artist Kenny Garrett), and stripping down to a yearning piano/trombone duo on "We'll Be Together Again."
Throughout the album, Anderson's playing is smooth and thoughtful, with plenty of swing and almost no extraneous adults-in-Charlie-Brown-world wah-wah-ing. Unfortunately, on more than half the album, his band brings little to the table beyond technical facility. Yes, Cranshaw and Foster are great players, as proven by their mammoth discographies. But they sleepwalk through this session, swinging by reflex rather than from the heart. As a result, tracks like "I'm Glad There Is You," "Deja-Blu" and "I'm Old Fashioned" become mere background music. Without doubt, this Decade belongs to the younger rhythm team of McBride and Jordan. 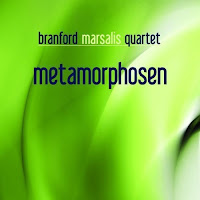 BRANFORD MARSALIS QUARTET
Metamorphosen (Marsalis Music)
On the Branford Marsalis Quartet's Metamorphosen, the leader alternates among tenor, soprano and alto saxophones, his tone and phrasing on each instrument conjuring nothing so much as an angry bug trapped inside a light fixture. The album's at its best when it showcases the other members of the quartet, who have been playing as a unit for 10 years.
Pianist Joey Calderazzo contributes two compositions, as does drummer Jeff "Tain" Watts, while bassist Eric Revis is credited with three. The lone Marsalis tune, "Jabberwocky," marks his first recording on alto in 20 years, but Calderazzo and Revis are the standout performers on that track. Album opener "The Return of the Jitney Man" - a Watts composition that also leads the drummer's recent self-titled recording - is an upbeat, rhythmically complx yet hard-swinging fanfare, the kind of performance guaranteed to kick off a live set in roaring, vibrant style. The final track, Watts' "Samo©," does something similar, bringing the album full circle.
In between, an interpretation of Monk's "Rhythm-a-Ning" exaggerates the original's stuttering feel to ultimately distracting effect, while the album's final third is dominated by two intense tracks - Calderazzo's wistful "Last Goodbye" and Revis' three-minute solo bass turn, "And Then, He Was Gone." The performances on these two pieces provide album highlights, recalling the John Coltrane Quartet circa Crescent. 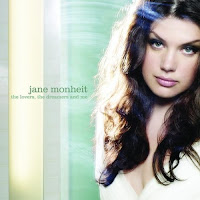 JANE MONHEIT
The Lovers, the Dreamers and Me (Concord)
The title of vocalist Jane Monheit's latest album cribs a line from "Rainbow Connection," a song from 1979's Muppet Movie with which she closes the disc. Along the way, she revisits a variety of moody material, from BIlly Barnes' noirish "Something Cool" to Fran Landesman and Tommy Wolf's melancholy "Ballad of the Sad Young Men." Unfortunately, she seems out of her depth.
Monheit's vocal technique primarily consists of gliding from phrase to phrase, as though half-asleep. Perhaps her lowered eyes in the CD booklet photos aren't contrived. If Monheit's delivery on "This Girl's in Love With You" is any indication, she could well be narcoleptic. This does a disservice to the lyricists whose work she essays. Fiona Apple is one of the smartest, most idiosyncratic singer-songwriters in contemporary pop, and to reduce "Slow Like Honey" to a drawling crawl strips the original of its weird, unsettling appeal. Similarly, Paul Simon's genius is as much about rhythm as vocabulary, but Monheit's take on "I Do It for Your Love" is all wafting strings and delicate tap-tap-tap cymbal work from drummer Antonio Sanchéz; she transforms Simon's portrait of domestic bliss into a fugue of ennui.
Backing musicians - including ringers such as vibes master Stefon Harris, guitarist Peter Bernstein and saxophonist Seamus Blake - do what they can, but the arrangements smother them. Tempos range from ballad to dirge, and Monheit seems reluctantly roused. Ultimately, The Lovers is too enervating even for background music.
Posted by Phil Freeman at 12:39 PM