13-year-old British boy spends a week listening to a Walkman instead of an iPod, reports back. I remember wearing a fishing vest to school so I'd have enough pockets to carry all the cassettes I might want to listen to during a given day. Irony: the iPod adapter cord that links the device to my living room stereo is connected to the port where I'd otherwise plug in a tape deck, if I had one. 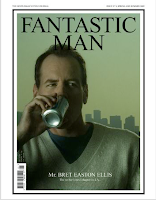 Bret Easton Ellis thinks The Hills is "a modern masterpiece," according to Gawker via Dutch magazine Fantastic Man. I'm not all that surprised by this, honestly. For years, I've been saying (not here, but in actual conversation) that The Hills reminds me of Ellis's work, not just because of the blond blandness of its cast and their conversations, but because of the creators' approach to the material. Every time a new scene begins, each character is identified with their name and position ("Spencer, Heidi's boyfriend"; "Audrina, Lauren's friend"). I can't tell whether the showrunners are telling us "these people are so faceless and interchangeable that we don't think you'll remember who they are, or be able to tell one from another, unless we regularly prompt you" or "you're so stupid - we can tell because you're watching The Hills - that we don't think you'll remember who these people are unless we remind you every two or three minutes." I think the former interpretation speaks more to my desire to believe the show's creators are deeply cynical, even possibly satirists under deep, deep cover. But who knows? Maybe we'll have to wait until the show goes off the air for its creators to speak honestly about their artistic intentions.