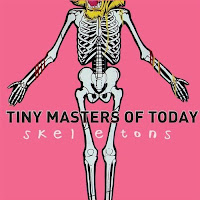 "So much current music inspired by the punk movement falls prey to easy formulas and predictable tropes. Tiny Masters of Today separate themselves from the pack due to their willingness to experiment, and not simply due to their age... The novelty factor of age will understandably follow the group, as it has become a key facet of their identity in the public eye. However, since this is their second album, the band deserves to move beyond novelty status... There seems (sic) to be simultaneous, contradictory impulses at work on Skeletons: the desire to move beyond kiddie novelty status and the desire to confront the challenges of youth. The filters on many of the tracks mask Ada’s vocals in such a way that one might think she’s a twenty-something woman. However, song titles like 'Abercrombie Zombie' and lyrics about bullies find the band simply trying to find their place in a grown-up world... Each song on Skeletons is an exercise in brevity that suits the spartan lyrical approach and punk spirit... On 'Real Good,' as on the rest of the album, the band exhibits a deft ability to avoid driving a hook into the ground. Songs are over before they have a chance to grate... the level of taste on display throughout Skeletons remains high." - Craig Carson, Popmatters

"It is easy to overrate music made by kids. First and foremost: the "they are pretty good for their age!" factor, which can override critical faculties and make us forgive the sort of artistic decisions we'd normally find boring or annoying in the work of adults... Nevertheless, if we're being very honest, the music made by children and young teenagers is almost always awful, and the Tiny Masters of Today, despite being signed to an EMI label, are not an exception to the rule... [T]he level of musicianship on the record is adequate, and at least on the same level as countless mediocre punk and indie bands... They are impressive only in comparison to a) other kids their age who have not somehow been encouraged to become a full-time touring band by hipster stage parents, and b) their least-inspired adult contemporaries. At their best, the Tiny Masters provide self-conscious kiddy variations on vaguely arty strains of punk and alt-rock, but there is very little practical use for this music besides causing adults to go, "awww, cute!" The lyrics are predictably banal and laughable, the vocals are uniformly flat and insecure. The melodies are not bad, but they are simplistic and mostly have the irritating cadences of playground chants and jingles. (Truly, much of the album sounds like a series of homemade Mountain Dew ads.)... It does not matter how old the authors may be - this is very shallow, unengaging music, and it is hard to imagine anyone truly caring about any of these songs." - Matthew Perpetua, Pitchfork

OK, I admit it: this is an album I wouldn't listen to on a dare. I imagine its target audience to be entirely composed of people who look like the lead couple in the movie Away We Go. I just found the stark contrast intriguing - and truth be told, it becomes even more stark if you read both reviews in their entirety.
Posted by Phil Freeman at 5:39 AM