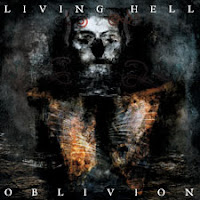 Jesus, what's there even to say about hardcore at this point? If Hatebreed's Satisfaction Is The Death Of Desire is your musical Year Zero, Oblivion will make you happy. Sure, there are a few tiny departures on Living Hell's sophomore album--the title track is built around an almost doomy riff and features a fair amount of guitar interplay--but the band are never gonna be mistaken for anything but a pure, inked-up, knuckle-dragging hardcore act. Just check out "122112," how it builds from an ominous half-speed intro (to give the muscleheads time to get their game faces on, as they start circling each other in the middle of the floor) to a double-time sprint (to give them an excuse to bounce off each other, shirtless, breathless and sweaty).

Oblivion is produced very well: the bass throbs; the drums are meaty; the guitars sound like the Jaws Of Life peeling the door off a wrecked car; and vocalist Craig Mack sounds like he's coughing up scraps of sandpaper. But none of those are stylistic choices as much as they are the price of admission, the rules of the game. If you play hardcore, you sound like this. Living Hell play by the rules, which makes their album serviceable but of little or no interest to outsiders.
Posted by Phil Freeman at 4:09 PM