KEITH JARRETT: AN EXPLORATION, PART 6 OF 8

Today, our journey through Keith Jarrett's 1970s Impulse! albums takes us to 1975's Mysteries, the sequel to Shades (unless I've got the chronology wrong, which is a possibility). Four more longish tracks - three of 'em pass the ten-minute mark, with only "Flame" coming in at a relatively concise-seeming (until you hear it, that is) six minutes. 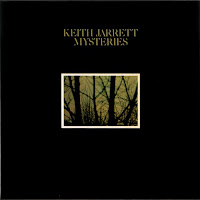 Mysteries kicks off with “Rotation,” a fast and free 11-minute track that feels like a rehash of stuff that’s come before, particularly on Shades. The melody’s not all that memorable, and Dewey Redman’s solos don’t really jump out from the whole. An inauspicious beginning.

“Everything That Lives, Laments” starts off well, with some deep resonant blowing from Redman over typically lush ballad playing from Jarrett and some free but not scattered drumming from Paul Motian. Charlie Haden gets a solo spot very early, only about a minute into the piece. Jarrett takes over pretty quickly, though, heading into cruise-ship dinner music territory as Motian sets up a shuffling, brushed drum pattern behind him. Soon enough, the energy builds, and the solo becomes something serious, with Haden digging a deep groove alongside. Right around the six-minute mark, Redman rejoins the party with a John Coltrane-ish (circa, say, 1964) solo, but a couple of minutes later Jarrett decides to kick things up a notch, doubling his speed and energy. It doesn’t work; just like when they've pulled this trick on earlier albums, it feels like a mistake, an inability to stick to one mood for the length of a piece that undermines the whole. The group returns to ballad playing in the final stretch, though, and manages to recover.

“Flame” is six minutes of keening flute and reed stuff over twangy bass and hand percussion and what sounds like steel drums. It’s okay as Middle Eastern-derived squawking goes, but it’s not something I’d be likely to listen to again.

The album concludes with the 15-minute title track, a super-lush ballad – music to slow-dance to in fancy clothes, except for the percussion (shakers, bells, that monkey-noise-maker) that throws unexpected and sometimes jarring notes into the mix, as it’s done throughout almost every one of these albums. (I just haven’t bothered to mention it.) Jarrett’s solo seems more like a collection of loosely related phrases, building to a stream of notes, than a considered and developed idea. Indeed, the whole track just kind of rolls endlessly on, never progressing to any real resolution, just going and going and going until eventually everyone but Jarrett stops playing, as though they’ve walked away bored, and then he dripples out a few final, timidly vibrating notes, and the track and the album are over.

I suppose I could program my CD player to skip “Flame” and this would turn into an enjoyable 35 minutes or so of music, but it’s very low-impact. Nothing jumps out, nothing makes any greater statement than “we all play our instruments very well and can read each other well enough to make seamless transitions and take the dominant or backing role with no stumbles or hesitation.” Which is the core of jazz technique, but there’s got to be some emotional resonance there, too, and on Mysteries there just isn’t any – it’s virtuosity without feeling, and it slides right by like balls of mercury on a marble floor.

I'm taking the weekend off from this project - back on Monday to talk about 1977's Byablue.
Posted by Phil Freeman at 10:45 AM

"Cuica" is the word you keep looking for. Surprised it didn't come up when you were writing about electric Miles - Airto played it a lot.

I'm sure I knew it back then, but I'm old and tired and too lazy to look it up this go-round. Thanks!