KEITH JARRETT: AN EXPLORATION, PART 8 OF 8

And so at last we come to the end of our journey through Keith Jarrett’s ’70s Impulse! albums. This has been pretty fascinating for me; prior to this, I barely owned any jazz records from the ’70s. I own Sam Rivers’s Crystals; a couple of Alice Coltrane discs; a few by Pharoah Sanders; everything by the late ’70s Cecil Taylor Unit and a couple of his other releases from that period; everything by Miles Davis between A Tribute To Jack Johnson and Agharta and Pangaea; the first three Mahavishnu Orchestra discs; some Return To Forever stuff; the Mosaic box anthologizing Anthony Braxton’s Arista albums; various albums by Herbie Hancock and his sidemen (Julian Priester, Eddie Henderson, Buster Williams); and a Weather Report box. But compared to the huge pile of albums from the ’50s and ’60s I’ve spent serious time with over the years, that’s practically nothing. And given how many young (by jazz standards) players are claming to have come up on non-fusion ’70s stuff, I feel like there’s a whole lot more that it's incumbent on me to explore. So for me, this is probably as much a starting point as an isolated short trip. But let’s talk about the album in question, shall we? 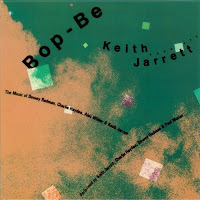 There’s actually not that much to say. Bop-Be has seven shortish tracks, once again almost all composed by members of the band other than Jarrett. The pianist contributes only the title piece, and for the first time on any of these albums, an outside composition is performed – “Blackberry Winter.”

“Mushi Mushi” is a Dewey Redman composition, punchy and swinging, with an opening blues-blast from him which is followed by a rockin ’n’ rollin’, classical-meets-gospel solo from Jarrett and some excellent breaking down of the rhythm by Paul Motian and Charlie Haden in the track’s final 90 seconds or so. It’s a solid opener with vocal in-studio enthusiasm from the bandmembers that’s totally deserved.

“Silence” is almost the exact opposite, an ultra-tender ballad that pretty much lives up to its name. Redman’s blowing so softly he barely vibrates the reed, Motian limits himself to cymbals, and Jarrett makes simple melodic statements with little adornment. It’s a quick, placid three minutes.

“Bop-Be” is a swinging piano trio piece; Jarrett spins out long ribbons of notes, returning to the melody like a runner grabbing cups of water as he circles the track at top speed. It sort of reminds me of the standard “Nice Work If You Can Get It.” It’s seven minutes long, but seems to fly by.

The next track, “Pyramids Moving,” is another in this group’s series of Middle Eastern sound explorations. Shrill reeds, bowed bass slathered in a weird distancing reverb, equally echoey cymbals and percussion, piano that sounds more like a celeste or a spinet – this is actually one of the weirdest avant pieces the group has offered throughout this eight-album run. It’s like music from a horror movie set in Egypt; it makes me want to look over my shoulder in case a mummy’s coming.

The nearly 11-minute “Gotta Get Some Sleep” is up next, a swinging romp that does relatively little to distinguish itself, despite offering solos for everyone but Motian. Redman is in ’50s Coltrane mode, though the melody is bouncier and slightly more jagged than you’d hear on a Prestige date of that vintage.

“Blackberry Winter” is another trio piece, a ballad this time. It’s very pretty.

The album’s final track, “Pocketful Of Cherry,” is a Charlie Haden composition written in tribute to Don Cherry, his former collaborator in Ornette Coleman’s band from 1959 to 1961, and it’s very much in the vein of that group’s work. The melody leaps right out at you, and Redman’s solo has a lot of Ornette – and a lot of his own work beside Coleman – in it. Haden, too, sounds like he’s flashing right back to 1959 as he pops the strings and swings with ferocious energy. In keeping with the Ornette Coleman feel, there’s no piano on the track; Jarrett plays soprano saxophone, squeaking and burbling along in such a way that you can almost imagine a joyful, yet focused smile on his face. Motian’s solo reminds me a little bit of Ed Blackwell, but I also hear Max Roach in the way he plays melodies on the drums. The songs swings hard all the way to the end, and that’s all there is.

Bop-Be is a weird album, precisely because (“Pyramids Moving” excepted) it’s so straight-ahead. The two trio pieces and “Silence” could be played in a restaurant without disturbing anyone’s dinner, and “Mushi Mushi” and “Gotta Get Some Sleep” are like what you’d get if you asked someone who’d never spent any serious time listening to jazz, “What does jazz sound like?” Even “Pocketful Of Cherry” is so happy and eager to please it’s amazing the quartet didn’t show up on Sesame Street performing it for a crowd of madly dancing Muppets and small children. I’m left wondering why they chose to go out on such a crowd-pleasing note, and (because I’m listening to this stuff thirty-plus years later) what kind of numbers it actually did.
Posted by Phil Freeman at 9:43 AM