KEITH JARRETT: AN EXPLORATION, PART 7 OF 8

Well, we’re in the home stretch now. Only two albums to go in my/our dig through Keith Jarrett’s 1970s Impulse! albums, and they’re pretty substantially different from everything that’s gone before. Today’s entry is Byablue, released early in 1977. 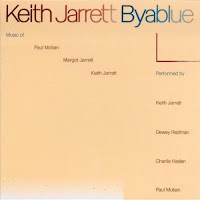 The most immediately noticeable thing about Byablue is how many tracks it has, and how short they are. Where the last three albums (Death And The Flower, Mysteries and Shades) had only three or four cuts each, Byablue has seven, only one fewer than the super-accessible Treasure Island. This may have something to do with the fact that with the exception of “Konya” and “Rainbow,” all the pieces on Byablue were written by Paul Motian. And while it’s not an exercise in melody and finger-poppin’ rhythm like TI, Byablue is definitely one of this group’s prettier outings – for the most part, anyway.

The opening title track (one of two versions that bracket the disc) is seven minutes of somewhat fractured, Ornette-derived blues, supported by heavy bass drum work from Paul Motian – he’s really kicking hard down there. Jarrett’s piano is off-kilter, the most Monk-like I’ve ever heard him be, but without losing touch with the melody. Indeed, he hangs onto it with remarkable tenacity, looping around again and again. Dewey Redman’s solo is filled with raw, crying emotion, but there’s something peevish about it, too; it reminds me of a toddler demanding attention.

The second piece, “Konya,” is one of those mantra-like reed exercises this band does from time to time, with Redman and Jarrett both keening and droning at each other as Motian smashes the cymbals and little chimes flutter in the back. If I didn’t know I was listening to a Keith Jarrett album, this could easily be by Roscoe Mitchell the way both reed players seem intent on squeezing every molecule of air out of their lungs with each variation of the melody line they play. Charlie Haden’s bowed bass adds one more drone to the mix as the piece ends.

The album really kicks into gear with “Rainbow,” a nearly nine-minute piano trio piece that features some really strong, rippling piano work, plus the return of Keith The Singing Hummingbird. Seriously, this track swings really nicely, with Jarrett’s piano and Haden’s bass taking up almost equal space in the mix and Motian’s delicately brushed drums the perfect rhythmic foundation, like walking on a bed of fresh-mown but dry grass.

Redman makes a brief appearance at the beginning, but for much of its length, “Trieste” is another piano trio piece, and an extraordinarily beautiful one at that. Motian plays like he’s dusting the kit rather than attempting to actually get sounds out of it (though he’s still kicking the bass drum more frequently than one might expect for a super-attenuated jazz ballad), and Haden makes a late entrance, but eventually takes a solo at around the six-minute mark that almost sounds like he’s tuning the bass with the tapes rolling. When he settles into a groove, Jarrett comes in behind him with tiny right-hand ripples that build into a classical-style crescendo. Redman finally reappears about 90 seconds before the end, spinning out blues connotations to little effect. He’s playing fine, but saying so little that he’s the weak link on the track.

This is followed by the minute-long “Fantasm,” about which extended comment would be superfluous. It sounds like a finger-loosening exercise; Motian doesn’t even play, and it ends abruptly.

“Yahllah” begins by bringing back the chimes and the reeds and some woodblock percussion, and lasts eight and a half minutes overall. But don’t be discouraged. The droney Middle Eastern stuff only lasts about two minutes. Then Jarrett starts playing some extremely deliberate, very beautiful unaccompanied piano for a minute or so. Then Motian starts beating out a pretty interesting, almost funk-rock rhythm, whereupon…aw, crap! Bowed bass and more of that goddamn snake-charmer reed! The piano was a trick; we’re back to the desert. And then at the six-minute mark, we change up again, with soprano sax and chimes and some forcefully strummed bass, which is nice enough until the snake-charming starts again. I would never dare to second-guess these guys’ interest in Middle Eastern music, but I think they vastly overestimated the average listener’s interest in it.

Byablue concludes with a solo piano version of its title piece, with lots of really nice sustained notes that almost create a droning rhythm all their own as Jarrett picks his way through the melody much more slowly than at the album’s outset, delving very slightly into dissonance in his explorations and extrapolations. When he starts singing along with himself, it’s in such a high register and so much clearer than usual that it’s almost like a female vocalist has been brought in, and it’s the first time his voice has added anything to the group’s music. A really nice conclusion to a really solid album.

Back tomorrow with this group’s final Impulse! recording, Bop-Be.
Posted by Phil Freeman at 9:48 AM