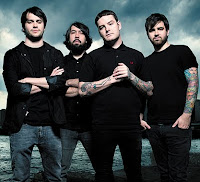 So your band has been around for seven years, releasing three albums and an EP. But your genre — screamo/post-hardcore — is one that attracts teenagers and young people, with little to offer older listeners — musically or lyrically. So there's no way to "graduate" to mainstream rock-radio airplay, and you're constantly struggling to hold onto your audience and keep them from moving on to the newest thing — in this case, wild-haired, skinny-jeans-wearing electro-crunk-screamo bands like BrokeNCYDE and 3OH!3. What do you do?

This is pretty much the position the guys in New Jersey's Senses Fail find themselves in as the touring cycle for their 2008 album Life Is Not a Waiting Room winds down. "It's easy when you've got a new record," says frontman James "Buddy" Nielsen. "You tour on it, and people want to come see you. It's hard when it's the end of a record cycle and you don't have something new, and we have to come up with something different — bring some cooler bands, or play smaller venues, or do different things to get people to come out."

"We're no longer a new buzz band, so you don't have that 'Oh my God, I gotta go see this' thing," he says. "You really have to work your ass off marketing-wise and touring-wise, and also being smart with your money, where you spend it and how you spend it, how you market yourself and how you tour. Right now is the busiest touring time of the year, so it's hard, because you're competing."

But the group hasn't let external pressures impact their music. Senses Fail started in their guitar player's North Jersey basement almost a decade ago, mixing the music of peers like Thursday and Saves the Day with Bad Religion and NOFX — "a lot of New Jersey stuff that was going on at the time but also a lot of Fat Wreck Chords/Epitaph stuff," says Nielsen. Over time, they've evolved, growing more sophisticated and slightly more pop-friendly without ever forgetting where they started.

Life Is Not a Waiting Room is a thematically unified, melodic post-hardcore album, with less sonic catharsis than the band's two previous full-lengths but just as much raw emotional despair. The whole record is about moving on from shattered relationships, overcoming a self-destructive past and heading toward some kind of future, alone or not. The one before it, 2006's Still Searching, was more concerned with issues of faith (and losing it), disillusionment and self-doubt, but retained the same focus. They're not concept albums per se, but they're utterly lacking in frivolity.

"When you write, you want to complete a thought," says Nielsen. "Overall, I try to keep a feel and a topic, and kind of tell personal stories and weave them in [so] that if you read it and listened to it, you'd have some sense of where this person was at in his life." He understands that not everyone demands this of a rock band — that some listeners hear emo bands and wish they'd just dry their tears and rock out — but he's uncomfortable with any other approach. "I got into this music because the lyrics meant something to me, and that's what I like about this, versus straight punk rock. Death-metal bands like Amon Amarth — they write shit that has no meaning. I can't relate to killing people and taking their gold. I've never killed anyone and stolen their gold."

The question of relevance — lyrical, existential — is one that dogs many punk-rock bands. How do you keep your audience from outgrowing you? The ritualized catharsis provided by metal bands appeals to a fan base that bonds for life; Judas Priest, Iron Maiden, Metallica and Slayer play to crowds ranging in age from 14 to 50 and beyond. But a group that makes much of its money on the annual Warped Tour is unlikely to see thirtysomethings at its club gigs, and with each passing year, it risks losing the teenagers who used to buy its records. Screamo doesn't get radio airplay, MTV barely plays videos anymore and the next generation of bands coming up behind doesn't traffic in the same heart-on-sleeve, "Dear-Diary" mindset.

Surprisingly, Nielsen believes the frivolity of bands like BrokeNCYDE (whom he criticized from the Warped stage this past summer) and 3OH!3 works in Senses Fail's favor. "A band like us or Thrice or Thursday, who have been around in this music scene for awhile, have people who like music, not just 'listen to it at a party' people," he says. "People who love listening to music, they love collecting records, you know? 3OH!3 people, they don't go to shows, they don't know there are shows, they just know 3OH!3 is playing Warped Tour 'cause it's all over the radio. So they go to Warped Tour, which is good for us, because we can potentially get some casual listeners to check out our band, and maybe they'll become a fan. But bands like that, they have such a schtick that when the schtick is over, it's over."
Posted by Phil Freeman at 3:29 PM