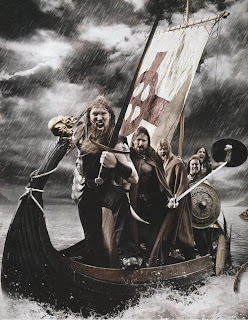 I've been a fan of Amon Amarth since seeing them on one of the five dates of the ill-fated Gods of Metal tour with Halford, Testament, and Immortal (among others) in 2003. They're a kick-ass band with a clearly defined style - melodic death metal with bottom-heavy riffs designed to get every head in the venue banging, and lyrics about Vikings and Norse mythology - and pretty much every album since 2002's Versus the World has kicked ass. The three before that (Once Sent from the Golden Hall, The Avenger and The Crusher) are all good, with moments of greatness, but the group's style was evolving throughout. Most noticeably, vocalist Johan Hegg gradually transitioned from a higher-pitched, more black metal-influenced scream to the barrel-chested growl/roar he's used on the band's last five albums.

One of the things that impresses me most about Amon Amarth, though, is their devotion to the idea of what's known in sci-fi/comic/geek circles as "fan service." In those arenas, it means giving fans what they want in terms of plot and characterization; in Amon Amarth-world, it means putting out really quality products for the diehards.

The most obvious example of this would be the group's eighth album, released last year. Twilight of the Thunder God was a big leap forward for Amon Amarth, musically speaking. They brought in guests for the first time ever (Roope Latvala of Children of Bodom played a shredtastic guitar solo on the title track, Entombed frontman LG Petrov did a vocal duet with Hegg on "Guardians of Asgaard," and the cellists of Apocalyptica created a melancholy outro for the album's penultimate track, "Live for the Kill") and really stepped up their game as songwriters and musicians, so even though they'd been moderately successful in the States (and bigger in Europe) thus far, they wanted to ensure that the album made a splash. So they created a couple of different deluxe editions. Of course, you could get the plain CD, but you could also get it as a digipak paired with a live CD recorded at the previous year's Summer Breeze Festival in Germany. Given that Amon Amarth are awesome live (more about that later), this was already a worthwhile purchase. But then they busted out the big guns. If you really wanted to go all-out, you could get the album, the live CD, a DVD version of the Summer Breeze show, a hardbound comic book telling the story of Thor's battle at Ragnarok (the subject of the song "Twilight of the Thunder God"), and a set of five Amon Amarth bobbleheads, made of metal and frankly, heavy as hell (I had a set in my office when I worked at Metal Edge, though I didn't take them home with me when I left for the last time).

Pretty awesome/hilarious, no? (Click the image to see it much bigger.)

In a similar spirit, when Amon Amarth decided to release a live DVD, they went all out. Wrath of the Norsemen is a three-disc set containing five complete concerts of varying length, including one during which sword-wielding, chain-mail-sporting dudes come onstage and fight mid-set, plus a half-hour documentary going behind the scenes at the aforementioned show (which takes up all of Disc One). You may never sit through the whole thing in one session, but it's a megadose of live Amon Amarth.

This year, the band decided to revisit their early catalog. They started by playing a four-night stand in Bochum, Germany in December '08, during which they played one of their first four albums in its entirety each night. Then they reissued Once Sent from the Golden Hall, The Avenger, The Crusher and Versus the World in deluxe double digipaks, each one paired with its live version and whatever bonus tracks it made sense to include. They didn't release them all at once; they were spaced out over the course of this year, with Versus the World just coming out this past week. The albums are remastered to sound fantastic, the live discs are great (because the band rarely, if ever, plays a lot of these songs), and the booklets include reminiscences of the sessions and track-by-track liner notes by the various bandmembers. All in all, it's exactly what a diehard Amon Amarth fan (like me) would want. In fact, looking at them on my shelf, I'm kinda wishing I'd hung onto those bobbleheads instead of passing them along to an (utterly deserving) newly ex-coworker.
Posted by Phil Freeman at 8:03 AM