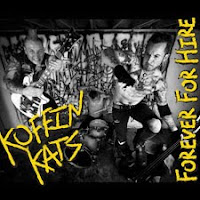 Psychobilly bands are nothing if not productive. Detroit's Koffin Kats got started in 2003, and they've already released four albums prior to this one. That's a lot of songs about death, cars, babes and rock 'n' roll, so it's important to have something unique that separates you from the pack. The Kats definitely have that--unfortunately, it's bassist/singer Vic Victor's voice. He's got this pompous, portentous thing going that puts him somewhere between the Damned's Dave Vanian and Danny Elfman in his Oingo Boingo days. That kind of overwrought delivery can work sometimes, like on the group's most aggressive, straight-ahead material or the hard-swinging ballad "Her Name Was Rock And Roll," but when the group downshifts into a grinding, almost metallic riff on "Saw My Friend Explode Today" (a schizoid song that also features ska-style chords on the verses) it becomes off-putting.

Victor's crooning isn't the band's only trick, of course; they throw some doo-wop harmonies into the intro of "The Final Day," Oi!-style gang shouts turn up on several tracks, and instrumentally they occasionally stretch into a roots-rock sound that will appeal to fans of Social Distortion or Girl In A Coma. Ultimately, psychobilly is all about conviction, and all three men are clearly enjoying themselves, so fans of the genre, and maybe the idly curious, will too.
Posted by Phil Freeman at 10:36 AM