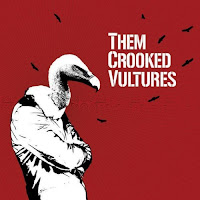 Can we disband the Cult of Josh Homme already? In terms of tours and releases, the guy keeps busy, sure; but in terms of quality of output, he’s been coasting since Kyuss broke up. Queens of the Stone Age released a moderately interesting debut album, and then got lazier and more self-infatuated with each passing year. And the less said about the Eagles of Death Metal, the better.

This new thing (which we’re of course being told is a real band, not a momentary enthusiasm) is a trio featuring Homme on guitar and vocals, John Paul Jones on bass and keyboards, and Dave Grohl on drums. The presence of Jones is the only thing that elevates this beyond being Vol. 11 of Homme’s jam-and-release “Desert Sessions,” and he’s ill-used. 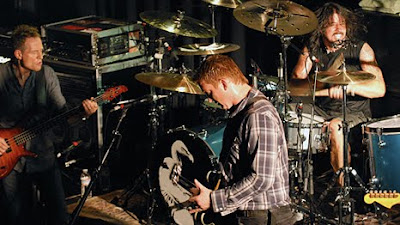 Paired with a drummer capable of groove (see Disc One of Led Zeppelin’s Physical Graffiti), he’s a monster. And there’s a riff midway through “Reptiles” that nods toward late Zeppelin. But Dave Grohl is not John Bonham; he’s a club-footed caveman, and not in a good way – the garage-metal primitivism of Nirvana was all he was ever really suited for.

Consequently, Jones can’t add much more than his name and some backing vocals and keyboards. As a bassist, he’s mostly limited to echoing Homme’s caveman-trudge riffing, and might not even have been the guitarist’s first pick: from its riff to its high-pitched vocal straight from the Jack Bruce playbook, “Scumbag Blues” sounds like a Cream cover with a little bit of funky organ floating stranded in the left speaker.

The real problem with Them Crooked Vultures, the band and the album, is that 2009’s already seen a much better example (bird-related name and all) of how to do the supergroup thing right – Chickenfoot, the Sammy Hagar/Joe Satriani/Michael Anthony/Chad Smith power quartet. From Hagar’s pumped-up vocals, his most emphatic since Montrose, to Satriani’s restrained yet skillful riffing and solos, to Anthony’s emphatic bass and undiminished-since-Van-Halen vocal harmonies, to Smith’s thunderous – and genuinely funky – drumming, the band’s self-titled debut disc was that rare 21st Century hard rock album that existed outside the pernicious influence of grunge. No ponderous dirges, only adrenaline-fueled party anthems with actual choruses, and a couple of ballads tacked on at the end.

Respect to Homme, Jones and Grohl (plus touring guitarist Alain Johannes, of course) for heading out on the road without a CD to flog, and for getting people to pay to watch and listen to them run through over an hour of entirely new music. But the truth is, Homme’s always been better at writing riffs than songs, and not by much. You can still occasionally stumble across a song by The Firm (Paul Rodgers, Jimmy Page) or The Power Station (Robert Palmer, Tony Thompson, 2/5 of Duran Duran) on the radio. It’s extremely doubtful that Them Crooked Vultures' half-assed first single “New Fang,” or anything else from this album, will have that kind of staying power.
Posted by Phil Freeman at 6:50 PM