RECENTLY IN THE WIRE

I used to put stuff I'd written for print publications up on this blog at the same time the issues were on newsstands, but editors have asked me not to do so. In a way, this is very flattering; it implies that they're worried that if people can get just my stuff for free, they won't buy the rest of the magazine, a contention I find dubious. But because I like these magazines, want them to do well, and most importantly want them to continue giving me work, I honor their requests.

That said: It always takes weeks for The Wire to reach America, for some reason. And I'm not even talking about the real America, I'm talking about New York City. For example, the December 09 issue is newly out (with a cover story on the amazing rapper Sensational), but I just got a copy of the November issue (with Julian Cope on the cover, looking like Iggy Pop's taller brother) last night. I published three reviews in the November issue. Here they are.

DEREK BAILEY & STEVE NOBLE
Out Of The Past
Ping Pong CD 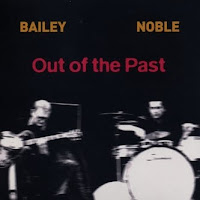 Is Derek Bailey destined to become the Tupac of European improv? His discography continues to expand in the years since his death, and this is a particularly riotous assault from beyond the grave. Bailey spent 40-odd years insisting on being utterly himself; consequently, his best albums were duos with equally strong-willed drummers. Steve Noble, most recently heard as part of the amp-frying NEW trio, was an ideal partner/opponent. This set was recorded - extremely well, it should be pointed out - a full decade ago, but such was the idiosyncratic state of Bailey's art that it coudl actually have happened any time between 1969 and the early 2000s.

He's in cranked-up electric mode throughout, as he was on contemporaneous recordings like Daedal with Susie Ibarra, or his work with The Ruins. Indeed, "The Long Wait," which opens the disc, and "Time Regained" and "7 Shades," its final two tracks, feature so much skronk and distortion they could easily be highlights of a compilation of Derek Bailey For Metalheads. In between, there are quieter passages: scrapes, buzzes, tiny pings. Throughout, Noble keeps pace, spinning out endless short rolls and cymbal washes that seem to be building to some sort of thunderous catharsis, but instead dissolve, subverted by a burst of noise from the older man.

When the music gets truly loud, Noble is ready, battering the kit in a way that jump-starts the listener's heart; when it's quieter, he sounds like he's building a birdhouse out of tin scraps as Bailey cuts wire to fasten it all together. This is a vigorous, combative album, documenting an encounter of such potency it's difficult to figure out why it was held back until now. 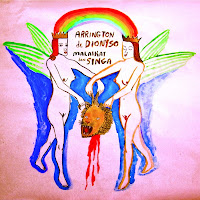 Arrington de Dionyso is a busy guy. First achieving underground renown as a member of free-trance punk-jazzers Old Time Relijun, he's put out a dumpster-full of solo and collaborative releases, switching back and forth between saxophone, bass clarinet, throat singing or something like it, and whatever else strikes his fancy at/in the moment. It flirts with farce every second, but somehow always pulls back from the brink of outright laughability.

On Malaikat Dan Singa, de Dionyso sings in Indonesian and plays long, squawky saxophone solos; there are also soem tape effects and drone pieces. Maybe if you speak Indonesian, it's brilliant, but if you don't it sounds like the vocalist from Finnish motorik rockers Circle in the middle of a particularly overripe tirade, with a bassist and drummer behind cranking out one-chord pummelling vamps. 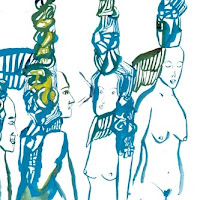 He also makes an appearance on Gigantomachia, the debut release from The Naked Future. This disc operates in a more conventionally free jazz mode, with keening and bluster from the bass clarinet, percussive piano, bass that churns and scrapes, and primitivist drumming. Track titles like "We Binge On A Bloodthirsty God," "We Boil The Raven's Skull Into Gold" and "We Fly Beneath And Above The Flux" suggest a collective desire to be seen as ecstatic pagans, but the abandon feels staged. De Dionyso's attempts to combine Walt Whitman's barbaric yawp with various cultural modes (Tuvan, Indonesian) and post-Arthur Doyle squawk and slobber reed technique, while admirable in the abstract, ultimately never quite result in the writing/creation of anything truly substantial. It's obvious that he regards himself and his art with utter seriousness; it's not at all clear, yet, why anyone else should do the same. 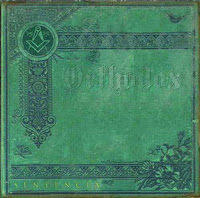 Orthodox were once metal, but are now much more. The Spanish trio's 2005 debut Gran Poder was doom metal that lived up to the group's name, never straying from the path of thumping drums and monstrous, crushing riffs. The following year, though, on Amanecer En Puerta Oscura, they began to display a deviant streak, incorporating trumpet, clarinet and piano in addition to guitar, bass and drums, and approaching free jazz as often as metal.

Electric guitars only appear on this third album's opening track, "Marcha De La Santa Sangre." It has a Western or Spanish feel, like an alternate soundtrack to the booze-soaked, Mexico-set Sam Peckinpah revenge flick Bring Me The Head Of Alfredo Garcia. The 26-minute "Ascension," making up the bulk of Sentencia, features piano, clarinet, brushed drums and an upright bass that's strummed, plucked and bowed, and a keening male vocalist who seems to be channelling Abbey Lincoln more than Ozzy Osbourne. The disc closes with "...Y La Muerte No Tendra Dominio," a duo for organ, drums and massively distorted percussion. At this point, all Orthodox share with doom or any other style of metal is a sense of spiritual questing and a fondness for ritualized pursuit of catharsis.
Posted by Phil Freeman at 6:56 AM