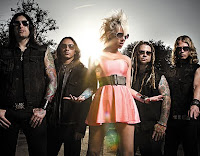 "There is something to be said for bands that seem really hard to get to, with a mystique," says voluptuous, heavily tattooed frontwoman Maria Brink. "But with the really hard album sales nowadays, that can only be taken so far, I think, because I don't think people give a shit anymore. Buying that CD isn't going to bring them closer to you, because you're not giving them an opportunity to meet you, ever."

For that reason, Brink and her bandmates — guitarists Chris Howorth and Blake Bunzel, bassist Jesse Landry and drummer Jeff Fabb — visit the merch booth nearly every night, to sign and shake hands and make personal connections that they hope will translate to customer loyalty.

"Nowadays, with downloading and everything, if you can personally connect with the fans as much as possible, and try to make them feel like they're part of a family, part of your community, then it touches them and it makes them want to support your band more," says Brink. "I really believe that."

Brink has a number of factors on her side, including her striking looks and Alice-in-Wonderland (if "Wonderland" was the name of an upscale gentlemen's club) stage wardrobe. But even if she took the stage in an oversized hoodie and baggy jeans, the band's brand of contemporary metal would still appeal to its growing fan base.

In This Moment's 2008 album The Dream was a stylistic gamble, shifting from the screaming metalcore of their debut, 2007's Beautiful Tragedy. With the help of producer Kevin Churko (Ozzy Osbourne, Celine Dion), the band embraced radio-friendly hard rock, combining new-wave-like melodies with anthemic choruses, while retaining the guitar crunch that had endeared them to fans on Ozzfest's second stage. The Dream also went further than its predecessor in showcasing Brink's ability to sing, not just scream. The disc was reissued this past summer with several bonus tracks, including a cover of Blondie's disco-era sex anthem "Call Me," confirming the band's ability to combine metal and pop in a manner not heard since the '80s.

The album may be a studio concoction, adding keyboards and layers of Brink's background vocals to its intricately composed songs, but In This Moment are a touring machine. They've played Ozzfest, opened a co-headlining jaunt with Ozzy and Rob Zombie, done the Warped Tour, and gone out on what seems like a dozen smaller bills. They'll play anywhere that'll have 'em — a strategy that got them off the ground in the first place, with a little subterfuge added to the mix.

"Even before we got signed, we said to ourselves that we didn't want to wait around for a label to sign us," says Brink. "We wanted to start getting our name out there. So we made up a fake booking-agent name, and we'd call clubs and say, 'This is such-and-such booking agent. We want to book In This Moment at your club, and this is how much they have to get.'"

And once the gigs were lined up, the members dropped everything and headed out the door — straight lives and day jobs be damned.

"We were like, 'We're just gonna get in the van and go tour.' It was so scary, especially for me, 'cause I had to set it up so that my mom would watch my son while I got into this van and drove around the country and made no money."

That's right: In addition to being a hard-touring rock diva, Maria Brink is a single mother to a teenage boy. And it's not just a matter of bringing him on board the bus; he's got his own life. "When we were on Ozzfest, he came and had fun," she says. "But now he's 16 and he's got a red Camaro and he's captain of the football team. I thought he'd come on Warped Tour, and he was like, 'No way.' He's very independent, he has a girlfriend and he's popular, and his idea of fun is not to be on a tour bus."

That doesn't mean she's leaving him unattended by any means. "I had to take off the football season," she says. "I can't tour [then]. I have to be there for my son's proud moments. Last year, I went to open house at his school; I'll be at open house this year. I give all his teachers my e-mail address, so if his grades are slacking or something's going on, they'll call me."

In This Moment's current headlining tour marks the end of the promotional cycle for The Dream. Then it's time for the next move — writing and recording a fresh batch of songs and trying to push their art and their public profile to the next level.

Truly, a mother's work is never done.
Posted by Phil Freeman at 4:37 PM