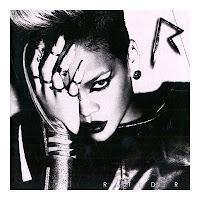 Rihanna's albums tell a surprising story: beautiful girl leaves Barbados for the big city and discovers her inner Goth. Between her 2005 debut and this fourth album, the Jay-Z protégé and R&B star has gotten pierced and tattooed, and gone from pastel bikinis to fetishy black leather, from a disarming smile to a glare worthy of Grace Jones. Rated R arrives in the wake of Rihanna's widely publicized beating by Chris Brown, and the lyrics are dark (and surprisingly profane) — from "Russian Roulette" to "Stupid in Love," which contains references to "blood on your hands" and the line "Don't talk to me like I'm stupid." Unfortunately, the music and words, often written by others, don't always match. The more minimal, dubstep-like tracks bolster the Rihanna image and brand, but the piano-and-strings ballads are too generic by half. Rated R demonstrates evolution, but she's got further to go yet.
Posted by Phil Freeman at 9:01 AM