I write a fair amount of reviews for Alternative Press; some of 'em make it to the print edition, while others are strictly for the website. Here are two of the latter. 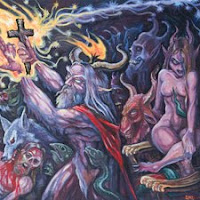 SAVIOURS
Accelerated Living
Kemado
Saviours have the same crystal-meth energy, primitive riffing and throat-searing vocals as High On Fire; they're just not nearly as awesome. While HOF's Matt Pike follows in the footsteps of Motörhead's Lemmy, Saviours frontman Austin Barber owes a clear debt to Discharge vocalist Cal Morris, and his bandmates crank out songs that sound like pastiches of Venom, early Iron Maiden, and other, similar bash-'em-in-the-head '80s bands, with some hardcore and punk thrown in. That's not to suggest that there isn't raw pleasure to be found on Accelerated Living; there is, and plenty of it, especially on songs like the epic "Livin' In The Void" or the biker-doom anthem "We Roam." The latter track features some genuinely impressive guitar interplay, too. Ultimately, though, all three of Saviours' albums to date have sounded like demos by your buddy's metal band. They've got the energy and the power; now they just need to write some songs, and they'll be ready to join HOF and the Sword in the top ranks of American underground metal. For the moment, they're still just also-rans. 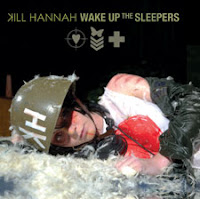 KILL HANNAH
Wake Up The Sleepers
Original Signal
Chicago's Kill Hannah could easily be summed up and dismissed as a watered-down, middle-American blend of Placebo, Garbage and Republica: They've got the buzzy guitars, fey vocals and hooks (which don't bite as deeply as they should); plus their willingness to dance (or ability to inspire others to do so) from time to time. But that would be cynical and unfair, ignoring how purely pleasurable Wake Up The Sleepers' best moments are. "New York City Speed" will make Shiny Toy Guns fans very happy, while "Radio" blatantly hijacks its verse melody from '80s footnote Kim Wilde's "Kids In America." Ultimately, Wake Up The Sleepers shifts moods too frequently for its own good, but many of the 13 songs are worthwhile on their own terms, if not as part of a coherent whole. Recommended, albeit in small doses.
Posted by Phil Freeman at 3:05 PM