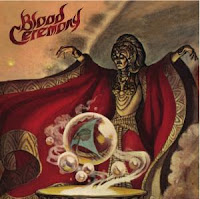 I recently got a record in the mail by a UK band named Blood Ceremony. It’s not terrible; it kinda sounds like the first Black Sabbath album, with a little bit of Uriah Heep organ and some Jethro Tull flute-tooting. The lyrics are all about Satanic rituals and the occult, and the achingly retro sound would make Witchcraft drool with envy. The band has one major weak point, though: the vocalist. She’s flat and tuneless, moaning like she’d been put into a trance by some dark priest right before the producer pressed ‘Record.’ This drove me away from the album, and sent me on a quest to hear the bands from which Blood Ceremony had quite clearly hijacked all their ideas. Not just Sabbath, Heep and Tull – I have plenty by the former two in my iPod already, and haven’t felt the need to hear Ian Anderson et al. since junior high. No, I decided it was time I finally heard Coven and Black Widow. 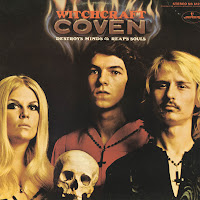 Coven had two different types of fame. On the one hand, they had a hit single from their second album – 1972’s “One Tin Soldier,” which appeared on the soundtrack to the movie Billy Jack and still crops up on compilations like Freedom Rock and the like. But three years earlier, they achieved an underground notoriety (which persists to this day) with their debut disc, 1969’s Witchcraft Destroys Minds And Reaps Souls. The cover art, which depicts three of the four bandmembers staring zombie-eyed at the potential purchaser, makes it look like some kind of dark Satanic epic. The gatefold features a shot of the lead vocalist, a hot-ish blonde woman named Jinx Dawson, stretched naked on an altar with a skull between her legs as the other members gather around for what one assumes is a Black Mass. And sure enough, the last track on this album, “Satanic Mass,” is a 13-minutes-plus recording of a ceremony – lots of chanting and dramatic recitations rather than, you know, a song. It kinda reminds me of one of those Halloween sound effects albums they used to sell when I was a kid, with the wind blowing through the haunted house and ghostly moans and the rest.

On their actual songs, Coven are far from a proto-metal band; the Stooges and Blue Cheer were much heavier than this. The music is almost jazzy prog-psychedelia with loads of organ, drum breaks DJ Shadow would probably sample, and the occasional Cream-y guitar solo. Plus Jinx Dawson’s vocals, which are somewhere between Janis Joplin and Grace Slick without the power of either. So the album basically exists as an artifact with a few weird bits of trivia attached to it (the first song is called “Black Sabbath,” and the band’s bassist was named Oz Osborne). Don’t bother. 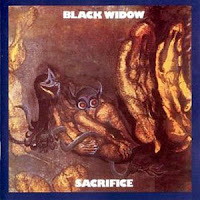 Black Widow, on the other hand, are pretty solid stuff. Like Black Sabbath, they arose out of the English blues-rock scene, and their debut album, 1970’s Sacrifice, was loaded with track titles like “Come To The Sabbat,” “Conjuration,” “Attack Of The Demon,” and their album-closing epic, the 11-minute title track. I like these guys better than Coven by a long stretch. With their swirling organ and saxophones, they remind me of a cross between Atomic Rooster and Uriah Heep or Procol Harum, throwing in touches of jazz and folk here and there. They’re not heavy in the metal sense, but you can definitely hear them doing something interesting within the basic post ’60s rock format. If you’re as big a fan of late ’60s/early ’70s rock as I am (I believe rock music had its period of greatest creativity between 1969 and 1975), Black Widow’s Sacrifice is worth checking out.
Posted by Phil Freeman at 9:52 AM

"Oz" is a pretty common nickname for people named Osbourne.