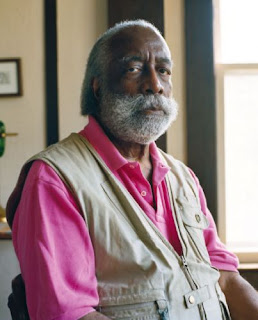 I've known this was coming for a few days, but was sworn to secrecy. Here's the email I just received from Scott Menhinick at Improvised Communications:

I've just been asked by his estate to deliver the sad news that trumpeter/composer/educator Bill Dixon died last night in his sleep at his longtime home in North Bennington, Vermont after a two-year illness.

Dixon is survived by his longtime partner Sharon Vogel and two children.

Information about a memorial service and where to send donations in his name is forthcoming.

An official obituary is in the works and will be available shortly.

Dixon was one of the most interesting people I've ever had the pleasure of interviewing (for The Wire; the piece is also included in Sound Levels). I'm gonna be listening to his music for a long, long time to come, and I'm sure other people will be, too. (I hope this loss, massive as it is, will if nothing else help get Intents & Purposes back in print on CD.)

Dixon's discography is far from massive, so it's not outlandish to suggest that one listen to as much of it as possible rather than recommending an ideal starting point. But if I had to pick personal favorites, they'd be:

Tapestries is indispensable because of its inclusion of a DVD that documents the recording sessions as well as lectures from Dixon on improvisation and ensemble playing. Indeed, if there's more of that footage (and I'm sure there is), it should really be made available. Musicians and listeners a like have a lot to learn from this man's body of work, and any ideas he chose to express directly need to be filtered into the cultural bloodstream as much and as soon as possible.
Posted by Phil Freeman at 8:42 AM
Labels: bill dixon, scott menhinick, the wire

an incredible artist, an example of the music for all....