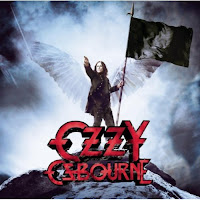 I met Ozzy Osbourne once. It was in 2007, backstage at Madison Square Garden. Mark Weiss was taking his picture for the cover of Metal Edge, which I was editing at the time. The story was gonna run a month later than it should have—we'd originally planned to have Ozzy and Rob Zombie on the cover, because they were co-headlining a U.S. tour. But Ozzy couldn't make the originally scheduled Chicago photo shoot, so we got photos of Rob and ran our interview with him, by itself, in one issue. Then we re-scheduled with Ozzy and planned to put him on the cover by himself the issue after RZ. Part of me thought, and still thinks, Team Ozzy did it on purpose.

Anyway, I hung out with Weiss, waiting and waiting with all the lights, backdrop, everything set up for when Ozzy would be ready for us. We wound up getting about five minutes. He came down the hall accompanied by a massive bodyguard whose two responsibilities were 1) to clear the hallway, and 2) to point out stuff on the floor that Ozzy might trip over, like electrical cords. Ozzy was wearing loose black pants, whatever black tunic he was gonna wear onstage, and old-man shoes (Rockports, I think) with velcro instead of laces, and he walked with the shambling gait of someone over 70, or someone with serious neurological damage. He came in, made Ozzy-ish faces for Weiss for about five minutes, then was almost ready to disappear when I asked if I could have a photo with him. He obliged, mustering his trademark maniacal grin on cue and throwing an arm around my back (I was a full head taller than him). Then he was gone, even quicker than he'd arrived.

I've never been a massive Ozzy fan—the only albums of his in my iPod are the first two, Blizzard of Ozz

and Diary of a Madman

. (Those two are being reissued in deluxe editions later this year, and I'll probably pick them up, especially if they come as two-CD sets packed with contemporaneous live material, or something like that.) I owned Bark at the Moon

as a kid, but only ever really liked the title track and maybe one other song. After that, I caught a track here and there, whichever one MTV was playing. Some I liked, some I didn't. I don't think I've ever hated any of his music.

. It's his first release in two decades not to feature guitarist Zakk Wylde; instead, Gus G of Firewind has been hired. The producer, Kevin Churko, is the same one who worked on Ozzy's last album, 2007's Black Rain

. I think this one's better, though. Maybe. A little.

The first song, "Let It Die," kicks off with an almost thrash riff, and some shredding from Gus G. This could be the opening to an Arch Enemy album. But don't be fooled, because the whole thing goes sideways really fast. The guitars go away, and there's a mechanical rhythm, creepy keyboards, and Ozzy talk-singing (I wouldn't call it rapping) through a distortion box. Only on the chorus does the guitar come back, and it's not a metal riff; it sounds something like industrial-tinged radio rock. And the synths are always there in the background.

The next track (and first single), "Let Me Hear You Scream," is more amped-up and metallic; it actually kinda sounds like it was performed by three musicians in a room together. "Soul Sucker" doesn't (more industrial-lite effects), but it's got a decent, doomy riff.

The fourth track, "Life Won't Wait," is totally not metal. It's built around acoustic guitar over a big throbbing bass drum and synth throb. But it's a nice song. Ozzy gets to sing instead of yelp, and he's still kind of good at it, as long as you give him a zillion takes and someone pastes together all the good bits in ProTools at day's end. Seriously, this is a pretty nice song, with some good work from the band, Blasko in particular—his bass roams all over, almost the lead instrumental voice with the acoustic guitar just strumming along.

At this point, the parameters of the album have been pretty much established, and the next two tracks, "Diggin' Me Down" and "Crucify," hold to them. They're heavy, but not shockingly so; the lyrics are about religion and hypocrisy. They're good enough (the songs and the lyrics).

Then along comes "Fearless," and suddenly the album takes a big jump up the quality scale. It starts with some seriously nasty, distorted, crunching guitar, and the riff is more Motörhead than Ozzy. The drumming's a little stiff, like Churko locked Bordin's actual hits to a grid, but Blasko manages to swing around that, keeping the whole thing lively. It's a really pleasant surprise to hear something this truly metallic.

Up next is "Time," one of Ozzy's ballads, very much in the tradition of "Mama, I'm Coming Home" or any of a dozen others he's put out over the years. It's fine, but listening to it, you can't help but hear all the other versions overlaid. Plus, there's some seriously cheesy keyboard-and-backing-vocals stuff going on in the back.

"I Want It More," the ninth song, is another super-heavy performance by the band. The guitar riff is practically thrash, and Gus G totally earns what I'm betting is a massive paycheck with a shredtastic solo. In the song's final third, the piano and (synth, probably) strings come out, but it still doesn't suck.

That's followed by "Latimer's Mercy," which pairs an ultra-heavy, throbbing bassline with some wah-wah guitar and meant-to-be-creepy synths as Ozzy sings about torturing someone. It's not bad, but Ozzy's demonic guise is unconvincing at this point. He should give Alice Cooper a call, get some tips on how to still be a scary monster even after people have seen you stumble around in your bathrobe. The album ends with a minute-long interlude called "I Love You All," Osbourne's longtime (I mean longtime; it dates back to the Sabbath days) benediction to the audience. And that's it.

I like Scream. Ozzy Osbourne's not a clown to me, at least not when he's behind the microphone. But there's a not-so-slight disconnect between him and his band throughout the album. It's so slickly produced, I feel like they played, and then he came in and sang. Which is fine; that's how it works almost all the time. But it doesn't have to feel that way. The illusion of a band making music together is important, and Kevin Churko almost manages that here. Bordin's drums sound processed to hell, to the point that I'm not at all sure he played on ever song, but the guitars and bass sound really good, and both Gus G and Blasko deliver terrific performances on song after song. But Ozzy always sounds slapped on afterward. A truly cynical listener (i.e., not me) could wonder if he even heard the backing tracks before Churko played him the final mix. And metal's not supposed to be like that. It's supposed to be about bros working together to make something. Pop records are about one person up front and some semi-anonymous pros backing him or her up.

But I guess Ozzy is a pop musician, in many ways. He's mononymous, like Elvis or Bono or Frank. A lot of people know him for his showbiz antics and have never heard one of his songs all the way through. So really, Scream is the only album he could have made at this point in his career. Rob Zombie, his former tourmate, is still able to pull off an album (Hellbilly Deluxe 2

) that sounds organic and raw, like four guys in a room jamming. Hell, it's his best record since White Zombie's major label debut. That's because he's defined himself by an aesthetic—white trash culture in a blender, with plenty of stage blood—whereas Ozzy has defined himself by a persona (former wild man, now aging and vulnerable to mockery). Zombie uses his persona in service to his aesthetic; Ozzy just shows up and is Ozzy, for however long you need him to be—a five-minute photo shoot, a 90-minute concert, or a 49-minute album. And if you know that going in, you'll find a lot to like on Scream.
Posted by Phil Freeman at 6:25 PM
Labels: alice cooper, arch enemy, blasko, gus g, kevin churko, mike bordin, ozzy osbourne, rob zombie, sharon osbourne, zakk wylde

I really enjoyed this track-by-track write-up, though it's doubtful I'll be picking this up, honestly. Shame about Bordin's drums; he had a vicious, thundering feel that was entirely unique back in the days before the click-and-drag production method.

Yeah, I agree - a more human drum sound would have made this a much better album. I was surprised at what a showcase it was for Blasko, though; even in his work with Rob Zombie prior to joining Ozzy's band, I always thought of him as kind of a "well, someone's gotta play the bass" seat-filler, but here he's really doing some good work.