ENGLISHMEN AND OTHER MUTANTS 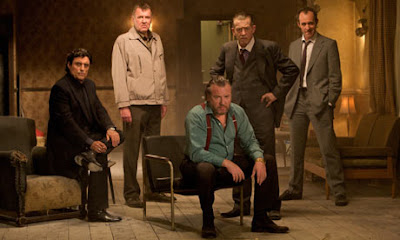 The British gangster movie 44 Inch Chest seemed promising when I spotted it on Netflix. A movie starring Ray Winstone, Ian McShane, Tom Wilkinson, John Hurt and Joanne Whalley about a gangster who kidnaps his wife's lover? I was sold. But the movie I actually saw felt like a cruel trick.

(I probably should have done just a few seconds' more research. I didn't find out until after I'd sat through the thing that it was written by the same two men who'd previously given the world Sexy Beast

Winstone's wife (Whalley) cheats on him with a younger man. So he beats the man's name out of her and he and his gang—though it should be made clear their criminality is merely implied; no illegal activities other than some violence take place on-screen—drag the hapless boytoy off to a hidden location...whereupon they start yelling at him. And each other. A lot. For the next hour and a half, more or less.

Do you like watching middle-aged Englishmen shout adolescent obscenities at each other? Does the idea of watching Ian McShane mince around while John Hurt screeches hoarsely about how much he loathes gays sound like your kind of evening? Have you wished there was some kind of cinematic diorama that would illustrate the varieties of English masculine sexual dysfunction for you, in the most unsubtle and caricatured manner possible? Then by all means check out 44 Inch Chest. Me, I'm not such a big fan of old men shouting "cunt" at each other at the top of their lungs.

What I am a fan of is Timothy Olyphant. Justified was easily the best new show of this past TV season, and though I never watched Deadwood (didn't have HBO at the time), I've enjoyed his work in a whole bunch of movies: The Girl Next Door, Go, A Perfect Getaway, Meet Bill, even total crap like Hitman and Live Free Or Die Hard. 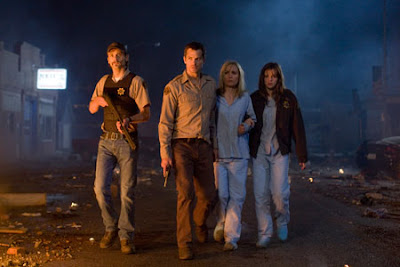 isn't crap. In fact, it's better than the 1973 George Romero original. That one had a good idea—small-town America afflicted with a biohazard that drives the neighbors to homicidal rage—and that's what the remakers kept. They changed a lot more, mostly by paring stuff away. The military perspective, which was present in the first version, has been almost totally excised. All you get is one soldier telling our heroes (and us) that he knows nothing, and a (presumably, since he's driving a black SUV and isn't wearing camo) higher-ranking dude explaining what the pollutant in the town's water supply is, exactly. But that information only comes after people have already been rounded up and divided into the infected and the clean.

), is his wife. The rest of the cast is basically anonymous (the exposition delivery system in the black SUV is played by Glenn Morshower, a Hey, It's That Guy! of the highest order) but they play frightened Iowans well. The violence is plentiful, but not splattery, and while it doesn't end as well as the Dawn of the Dead remake did, it has a similar fatalism. (Actually, it probably owes more to Return of the Living Dead