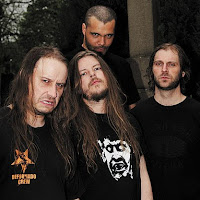 Ask your average music fan to name the most important and influential group to ever come out of Sweden and the answer will be Abba. Ask a metalhead the same question, and he'll tell you about Entombed. Daniel Ekeroth — author of the obsessive, passionate, and personal genre history Swedish Death Metal — says, "The Scandinavian metal scene would never have exploded without them. They changed everything. They were way ahead of any other Swedish band around 1990, with better songs, better sound, and above all, they were much better musicians than the rest."

That about covers it. The band formed in 1987 as Nihilist, blending Discharge's raging punk with Motörhead's speed-crazed metal with a side of distinctive distorted guitar tone. Rejecting the crisp, martial discipline of U.S. death-metal bands like Morbid Angel and Cannibal Corpse, they pioneered a looser, more groove-oriented sound known as "death 'n' roll." After splitting with bassist Johnny Hedlund, who soon formed Unleashed, they changed their name to Entombed and released 1990's Left Hand Path.

The album created a sensation throughout the worldwide metal community almost as soon as it was released. Its raw power and ferocious intensity were most apparent in Lars-Göran Petrov's gravelly, roaring vocals. Instead of the guttural grunts and blood-gargling sounds of other death-metal singers, Petrov came at the listener like an enraged bear. And behind him, the band straight-up rocked, attracting listeners from across the global underground, a fan base that remains united to this day. As the frontman points out, "If we play festivals around Europe, there are punks and death-metal people, everyone just headbanging to it. It's good to connect those different people to each other."

Last month marked the 20th anniversary of Left Hand Path, but unlike Slayer and Megadeth — who are co-headlining a tour and playing their 1990 releases, Seasons in the Abyss and Rust in Peace, front-to-back — Entombed aren't planning any elaborate celebrations. "It actually just passed by us somehow," laughs Petrov.

They'd rather look forward. Though peers like Grave and Dismember quickly emulated their style — creating the impression that, like AC/DC or the Ramones, every album is more or less the same — Entombed tweaked their sound quite a bit over the years. Uprising (from 2000) threw some bluesy riffs and rock grooves into the sonic stew, 2001's Morning Star was sweeping and epic, and 2003's Inferno had a punky edge and a deliberately rough mix. The group has also covered songs by a wide range of bands (Venom, Kiss, Hüsker Dü, Alice Cooper, Stiff Little Fingers, and Bob Dylan, to name a few) that can be heard on 2002's two-CD Sons of Satan Praise the Lord.

The common denominator is a loose, live feel that Petrov says is a main goal. "We try to do it as good as we can, but you have to have that live feeling," he says. "If you record something in one take and it sounds good and it doesn't have to be perfect, then we just leave it that way. There's nothing wrong with being perfectionist, but it loses the spontaneity."

The only misstep Entombed ever made is 1998's Same Difference. At the suggestion of their new record company, they steered into an alternative-rock direction, with Petrov adopting a clean singing voice, and guitarists Alex Hellid and Uffe Cederlund cutting way back on their distortion. "We had a record label that wanted to try new things, and we're always open to new stuff," he says. "But I think it was too much astray from what we wanted. I wasn't too comfortable recording that."

Entombed haven't released an album since 2007's Serpent Saints — The Ten Amendments. The band isn't even seriously planning one at the moment, but Petrov says it's got some new songs. "We just gotta put them together," he says. "We don't want to rush and just put out an album because we have to. It's just a matter of sitting down, putting [the songs] together, and recording it. We go once or twice a week to rehearse, but we mostly rehearse old songs. But once we have time, we will sit down and concentrate on the new songs."

These days, there are young bands explicitly modeling themselves on Entombed's pioneering Scandinavian death-metal sound — like California's Fatalist, who even use the same font Entombed uses for their logo. Petrov knows about the youngsters, and it makes him laugh. "It is exactly the logo," he says. "I think it's great. Somebody's taking over — they're following in our footsteps. We have some bands here in Sweden that are holding the flag for old school. It's the new wave of Swedish old school."
Posted by Phil Freeman at 9:28 AM
Labels: abba, ac/dc, cannibal corpse, daniel ekeroth, discharge, dismember, entombed, grave, morbid angel, motörhead, nihilist, ramones, slayer megadeth, unleashed