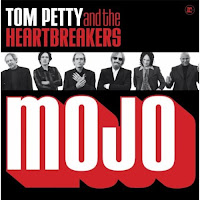 I've never been a major, diehard Tom Petty fan. Only ever owned one album, Full Moon Fever, as a kid. But I grew up in America, so I know all the hits—heard them my whole life on the radio, and they're all pretty great, one or two boring ballads aside. I have the boxed set, Playback, and last year's Live Anthology in my iPod. I haven't talked about that latter item here, but it's fantastic—four discs (five if you buy the super deluxe edition) of songs from shows going all the way back to 1980, and the band's so tight throughout, with only three membership changes in 35 years, that it could have been one long-ass concert. And the price was unbeatable; I got the four-CD version at Target for $22. What kind of major artist puts out a four-CD live box for $22? That's what you call fan service.

So anyway, the new Tom Petty and the Heartbreakers album, Mojo, came out today, and it's really good. As the video clips posted online indicate, the album was recorded almost entirely live in the studio, with minimal overdubbing and stripped-down arrangements. The liner notes even describe not only the session dates but the specific guitars and pieces of equipment used on each song, which is a little more than I need to know, but I'm sure someone cares. The point, for me, is that the songs are good to great. There are too many of them—fifteen in 65 minutes—but only a few drag, and none feel like outright mistakes.

What's really interesting to me is how different it sounds from all the other Petty records I've heard. The acoustic-guitar-led countryish stuff is kept to a minimum, and the jangling, Byrds-y side is tamped down, too. This is a fairly hard blues-rock album, driven by electric guitar and organ. The album's second track, "First Flash of Freedom," is close to seven minutes long, and its middle stretch is a meandering jam that sounds like the Grateful Dead, or the Allman Brothers, or some combination of the two. "I Should Have Known It" is so cranked-up and live-in-the-room, it sounds like the band is covering a track off Led Zeppelin's Physical Graffiti, especially when the bottleneck guitar solo kicks in. Other tracks have an almost Doors-y feel, minus the lyrical pretentiousness. Organist Benmont Tench gets a lot of spotlight time on this record, and he makes the most of all of it, without ever unleashing his inner Jon Lord or anything like that.

This is a band that communicates on an almost telepathic level. It's the kind of thing more veteran acts should be able to tap into, but can't, for some reason. ZZ Top can; I've seen them live and they're absolutely locked-in, and their strict policy in the studio, never violated, is that no sound will appear on a ZZ Top album unless it's been made by a member of ZZ Top. The horns on "She Loves My Automobile" from Degüello? They learned how to play 'em.

The Rolling Stones don't come close to this kind of cohesion. I don't think they ever had it. They've got (and have had, in the past) some great individual players, Charlie Watts in particular, but they couldn't make a live-in-the-studio album like Mojo if you put guns to their heads.

Contemporary rock bands, especially metal bands (much as I hate to say it), don't know how to make a live-in-the-studio album. Nobody's ever asked them to try. It's all about punching it in, laying down 50 versions of a riff until it's inhumanly perfect. Even Nirvana did it. I remember hearing my audio engineering professor play me "Smells Like Teen Spirit" and pointing out that Dave Grohl had only played his drum part once—one time through the verse, one time through the chorus—and Butch Vig, the producer, had cut 'n' pasted it to get through the rest of the song. How punk rock. How "real."

But I digress. My point is, this new Tom Petty and the Heartbreakers album is great and you should listen to it. I foresee myself listening to it a lot this summer.
Posted by Phil Freeman at 8:47 AM
Labels: allman brothers, benmont tench, butch vig, dave grohl, doors, grateful dead, heartbreakers, led zeppelin, nirvana, tom petty, zz top