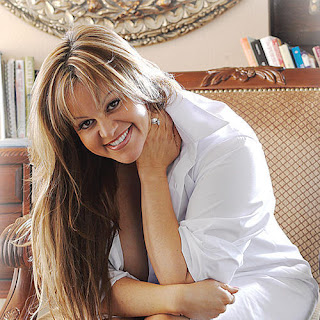 Jenni Rivera is one of the most popular singers, male or female, in regional Mexican music. She's carved out a unique niche for herself by specializing in banda, a genre dominated by all-male ensembles like Banda el Recodo or Banda Machos.

She frequently branches out into norteño and even pop, but the horn-heavy sound (trumpets, trombones, clarinets and tuba) provides the primary platform for her full yet often surprisingly intimate and even conversational voice.

Even by the standards of a floridly emotional genre built on lyrical storytelling, Rivera's albums have a strikingly personal feel; 2007's Mi Vida Loca

, a commercial and artistic breakthrough, featured lyrics based on her own life, delving into single motherhood, bad relationships, a brutal divorce and more.

"I do touch subjects that other artists aren't prepared to do, or maybe they don't feel it because they haven't been through it," says Rivera by phone from her California home.

"I don't have a problem singing about women's survival, about how to get ahead in life, about being a single mother, about domestic violence, and basically it's because I have gone through things like that; it's because it's a reality," she adds. "It's not just me that went through that — there's a lot of my fans that may be going through those situations as well."

Of course, Rivera doesn't write all her own lyrics. Like most regional Mexican artists (and English-language pop and country acts, for that matter), she records a lot of material submitted to her management and label by professional songwriters. It's extremely important to her that every song she chooses must contain that core of genuine feeling and experience, though.

"It's not just about singing these days," she explains. "People need to believe what they hear, they need to believe what they see onstage, and I like to transmit a feeling or a situation, an experience, to my public. Maybe not necessarily something that I may be going through, but somebody listening may be going through that and can feel familiar and identify themselves with the song.

"It's mainly songs that could happen, songs that have happened to certain people."

That kind of honesty extends beyond the words Rivera sings. It encompasses all aspects of her public persona, right down to the way she dresses on her album covers. On early discs like Que Me Entierren con La Banda

or Se Las Voy a Dar a Otro

, she wore the half-buttoned shirts and cowboy hats required of female performers in regional Mexican music, but eventually she pushed back and decided to portray herself as she truly was: Not the daughter of a rancher from northern Mexico, but the U.S.-born, college-educated daughter of immigrants, living in Long Beach.

"Wearing a cowboy hat got too hot, it made my head sweat," she recalls with a laugh. "So I said, 'I can't do this, I gotta be myself.' I love baseball caps. There was a time when I put my hair in braids. And I figured I can't go out there and fake to be something I'm not. People like to see genuine, authentic people. And they're already hearing me as an authentic woman, so I might as well give them that image that I already have."

Rivera's mix of modernity and respect for tradition has been another hallmark of her career. In 2003, she recorded Homenaje a las Grandes

, an album of songs made famous by other female vocalists, including Rocio Dúrcal, Lola Beltrán...and Diana Ross.

Like many children of Mexican immigrants, Rivera grew up listening to English-language pop, from oldies to hip-hop, as well as traditional and modern Mexican music. On various albums, she's recorded banda versions of the Supremes' "Where Did Our Love Go," Gloria Gaynor's "I Will Survive" and Rosie & the Originals' "Angel Baby," all songs with appeal to Latinos and non-Latinos alike. On her latest album, La Gran Señora

, she tackles Freddy Fender's "Before the Next Teardrop Falls."

Naturally, given her bilingualism and her stature within the Latin music industry, the question of recording entirely in English has come up, but Rivera isn't particularly interested in effectively starting her career over in pursuit of Anglo listeners. She'd be more inclined to do pop arrangements of the type of songs she's banda-ized in the past; in her words, "an oldies album, something like what Queen Latifah did, remakes of oldies that maybe you can listen to on the [West Coast DJ] Art Laboe radio show."

Currently, Rivera's got one foot firmly planted in each world. La Gran Señora, her 2009 release, is a departure from her core banda style. Other than the two versions (one Tex-Mex country, one acoustic) of "Before the Next Teardrop Falls," it's a traditional mariachi album.

The project, she says, was "always in my heart, and I wanted to do it someday. Even though I was raised in the United States, my parents are 100 percent traditional Mexicans, and this is the music they taught me to listen to."

In support of the record, she'll be playing Houston with her full 15-piece banda and a ten-member mariachi group, doing two sets featuring traditional material, the new songs and her many hits. And later this year, she'll be touring as part of Lilith Fair, one of only a handful of Latin acts on the all-female bill, and the only one not playing pop or R&B-based music.

Rivera plans on making an indelible impression on the tour's largely white, suburban audience, most of whom are unlikely to have ever heard of her. She'll be performing her English-language repertoire while backed by an all-female mariachi band.

"What I'm gonna do is do songs I've recorded, but now it's gonna be mariachi and it's gonna be live," she says excitedly. "And then I'll be doing some traditional stuff like 'Puro Amor' or 'Cielito Lindo' or something like that, something the crowd will be able to relate to and remember.

"We've all heard those songs, whether you're Mexican or not, so people will be able to relate to that," Rivera concludes. "I'm gonna be trying to entertain the public in a Mexican way, basically."